Is the sporty new BMW i3s worth £3k extra? We try the range-extender version to find out… 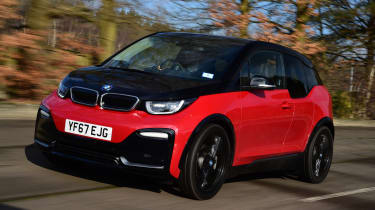 It’s an impressive feat of engineering for BMW to give the i3 more performance without cutting the range at the same time, and to sharpen the way it drives. However, the standard car is hardly a slouch in the situations that matter, and is pretty good to drive, so we struggle to see how the i3s is worth the considerable extra you have to pay for it.

Arguably it was Tesla that introduced today’s car buyer to the concept of a high-performance electric vehicle, but now BMW’s city car is getting in on the act.

As part of revisions to the i3 range, a more powerful version of the car has been launched in the UK. Just like the standard variant, the new i3s is available as a full-electric model and a range-extender hybrid. As well as the stronger motor, it comes with its own chassis set-up.

The headline figures are that the i3s has 181bhp rather than the standard car’s 168bhp. There’s also 270Nm of torque instead of the regular i3’s 250Nm. This means an increase of 6mph in the top speed and the 0-62mph time is cut by four tenths to 7.7 seconds. 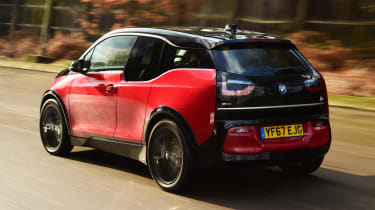 At the same time, the i3s gets a revised suspension set-up to cope with the extra power. So the car sits 10mm lower on sports suspension, and comes with 20-inch alloys and wider tyres.

On the road, these revisions are more obvious than the extra power. While the i3s still feels firm, it’s more balanced and better controlled than the standard car. You notice it around town, but it’s more apparent on the open road, where it feels more positive and instils more confidence.

You can also feel that the i3s is quick, and as with every electric car, it responds as soon as you press the accelerator pedal. You’ll almost never be beaten away from the lights, it’s easy to take advantage of overtaking opportunities and the BMW has no problem keeping up on the motorway.

Trouble is, you can say all that about the standard car as well, so it’s hard to appreciate any substantial difference between an i3 and the i3s. And that’s a bit disappointing when the company charges an extra £3,000 for the new car.

However, this is really the only price you pay. Although the official tests say the i3s won’t go quite as far on a single charge as the standard version, BMW claims that, in the real world, there’s no difference between the two models.

We drove the i3s range-extender, and with just the electric motor driving, progress is pretty much silent. Only when the available range drops right down does the two-cylinder motor kick in to recharge the batteries. You will certainly hear the engine, especially around town, but the noise melts into the background at speed. 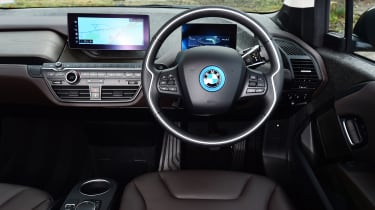 The BMW’s cabin remains supremely futuristic. The twin TFT screens, along with the distinctive materials and shapes used for the interior, give the whole thing a cutting-edge feel.

Best of all, this isn’t at the expense of equipment or passenger space. It’s easy to get in and out, with rear-hinged doors at the back, and you can get four adults inside in comfort. Admittedly, the boot isn’t that big, but it’s on par with what you’ll find in a city car like the VW up!.

For town dwellers with an eye on the environment and their bank balances, there’s a lot of appeal in an ultra-low-emission car. However, when the standard model is already so good, many people may find it hard to justify the £3,000 premium the i3s commands.