A bigger battery means more range for the updated BMW i3, but can it keep pace with more modern rivals? 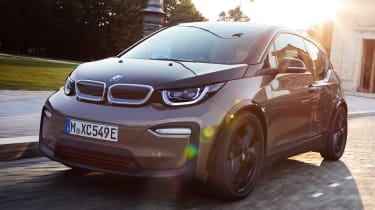 More range can only be a good thing when it comes to EVs, and the BMW i3’s price means it’s still relatively affordable for a premium electric car. New i3 owners will benefit from more flexibility, but they’ll also be dogged by the same flaws, which haven’t been addressed with this update – namely the poor ride and the lack of standard safety and connectivity tech.

BMW’s bravery, vision, determination – call it what you will – ensured the i3 was a roaring success when it launched back in 2013. It was the first premium electric vehicle and although it was pricey, it sold strongly.

But as time has passed and new rivals have popped up offering even more affordability and better all-electric ranges. Now, though, the i3 has undergone change in the area that really matters most to EV buyers: the battery.

BMW does things differently and rates its cars by amp hours (Ah). The i3 launched with a 60Ah battery, or 22.6kWh in normal EV parlance. An update in 2016 pushed this to 94Ah or 33kWh – and now this new i3 gets a 120Ah, or 42.2kWh battery. To put that into perspective, the Nissan Leaf now comes with a 40kWh battery, while the Hyundai Kona Electric is available with a choice of 39kWh or 64kWh cells. 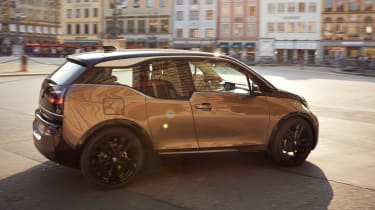 It means the i3’s claimed WLTP-rated range is up to 193 miles, while BMW expects a real-world 162 miles from a full charge. That is nearly a 30 per cent improvement over its predecessor.

An 80 per cent top-up takes 15 hours from a standard three-pin supply, just under nine hours 30 minutes with a 3.7kW wallbox, or a little over three hours with a faster 11kW unit. The i3 also supports 50kW DC rapid charging – hook up here and the recharge time drops to just 45 minutes.

In all other respects, the i3 is as it was, which means there’s a choice between the standard car with 168bhp, or the 181bhp i3s. BMW no longer offers the petrol-electric i3 Range Extender model, however. 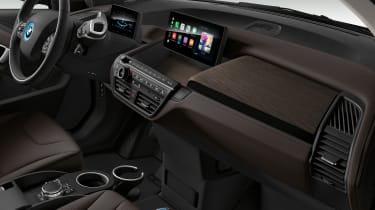 The regular i3 will accelerate from 0-62mph in 7.3 seconds (nearly a second faster than a Suzuki Swift Sport) and top out at 93mph. But as with any EV it’s more about the torque – 250Nm in this case – and the instant response and shove it provides.

Up to 30mph, and in the urban environments these EVs will inevitably spend most of their time, it’s better than brisk. Away from the lights the motor whine is kept to a minimum, and the regenerative braking that allows one pedal driving is still one of the most intuitive setups on the market. BMW has really got this element nailed compared with some of its competitors, even if the switch between the regen and friction brakes could be smoother still.

As the i3 remains unchanged in most ways, the car still posses all of the flaws of the old one, and a big drawback is the ride. The clever carbonfibre construction is still present, but so is the brittle, sometimes crashy ride that’s afflicted the i3 since it launched.

Boot space is also limited, at 260 litres with the rear seats up. But given how most will use the i3 this should be sufficient most of the time. Only longer journeys will test its practicality.

The rear-hinged back doors are as cool as ever and a neat solution, but still reveal a cramped rear cabin. However, this is constructed with the same reclaimed materials as you’ll find in the front, and offers a cool but techy feel thanks to the equipment on offer.

For your £31,680 (including a £3,500 government plug-in car grant) you get BMW’s Professional nav system with the great iDrive interface. You’ll also find a selection of connected services, Bluetooth, LED lights, heated seats and parking sensors. However, autonomous braking is part of the £790 Driving Assistant Plus package, while Apple CarPlay costs £235.