Price drop makes the Suzuki Swift Sport a vastly more tempting prospect. Grab a bargain while you can...

It may not quite offer the outright thrills of its predecessors, but the new Suzuki Swift Sport has moved its game on, both in terms of performance and refinement. Fast car fans on a budget should consider it a tempting alternative to both the VW up! GTI and the Ford Fiesta ST-Line. The £1,500 price reduction places the Swift Sport where it always should have been.

It’s not an exaggeration to say that the Suzuki Swift Sport was one of the most hotly anticipated cars of 2018. Both of its predecessors delivered unpretentious, affordable driving thrills, so this third generation model - lighter and more powerful than ever - would surely deliver. Wouldn’t it?

Sadly, during an early encounter last month, expectation and reality didn’t really match up. A thrash along Spanish roads revealed a sweet handling warm hatchback, but one that perhaps lacked the exciting edge of its predecessors. But the biggest issue was the price: at £17,999, Suzuki was asking a hefty £4,000 more than you’d need to bag a Volkswagen up! GTI. It was troublingly close to Ford Fiesta ST money, too.

But in a move that could turn out to be as bold as the Swift Sport’s Champion Yellow paint, Suzuki has slashed £1,500 from the asking price – albeit only until the end of June. So on UK tarmac and with this new figure in mind, can the Swift Sport win us over? 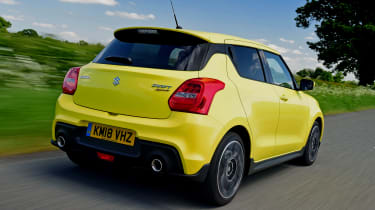 First impressions are positive. The Swift’s mechanical upgrades sell themselves much more effectively on bumpy British B-roads than smooth Spanish surfaces. Suzuki says that the Sport’s suspension setup is designed to add control without compromising ride comfort too much and, overall, it’s worked.

Though the car jiggles slightly around town, at higher speeds there’s a well-judged suppleness to the damping. The tradeoff is a little more body roll than in rivals’, but grip is plentiful.

So while the suspension setup is a hit, our other impressions remain the same. Many of the greatest hot hatches are lauded for throttle adjustability – but the latest Swift Sport isn’t one of them. This straight-laced feel to the chassis isn’t helped by a traction control system that, though not overly anxious, can be ham-fisted when it steps in. The steering doesn’t brim with feel, but it is precise.

The brakes – larger at the front than the regular Swift and with uprated pads all round – feel grabby at first, but give plenty of confidence. The pedals are well placed for heel-and-toe downshifts, too.

Under the bonnet sits Suzuki’s 1.4-litre turbocharged Boosterjet engine. It’s the same 138bhp unit fitted to the Vitara S, but weighing just 975kg, the hatch always feels raring to launch forward at the slightest stab of the throttle. The revvy unit is paired to a close ratio six-speed gearbox which, though positive, lacks the snappy feel you get from an up! GTI. 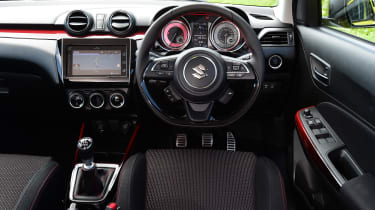 Sporty touches range from the 17-inch alloy wheels, to the subtle body kit and a pair of chrome tail pipes. You’re greeted inside by a pair of lovely sports seats and some red flashes of trim to distract you from scratchy, flimsy plastics.

Suzuki has yet to announce the monthly finance figures for the Swift Sport. However, it’ll struggle to compete with the up! GTI in this regard, as the VW is both cheaper and has class-leading residual values. We just hope the firm sees sense and holds that appealingly lower list price.