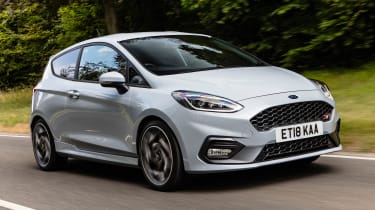 If you were one of those who criticised the old Ford Fiesta ST for being too stiff and hardcore, you’ll love the new one. Thanks to new dampers and a softer set-up, the new Fiesta ST rides better than ever before. Some of the car’s agility has been lost as a result, but a much improved interior makes the new ST a more rounded and better everyday car.

The old Ford Fiesta ST will go down as one of the finest modern Fast Fords ever. Acrobatic handling and a sweet engine were all wrapped up in bodywork that had just the right amount of boy racer styling. The fact that it had a bargain basement price tag was the icing on the cake.

So for the third-generation ST Ford knew the pressure was on to improve what was regarded as a near perfect hot hatchback. That’s why they handed over the considerable task of replacing a golden oldie to Ford Performance – a division that created the Focus RS. And as we discovered at the blue oval’s Lommel test track earlier this year, the team had just about nailed it.

But testing a car on the manufacturer’s very own test track can only yield so much. That’s why ever since that drive in early May we’ve been keen to see how the new Fiesta ST plays its part on Britain’s famous b-roads – and now we have the chance. 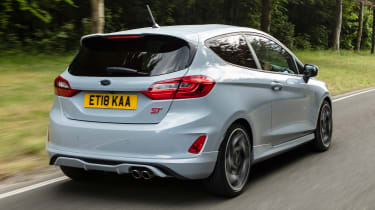 But a quick recap. As you would expect the standard Fiesta’s body has been spruced up for the ST and it’s 14 per cent more rigid thanks to some extra bracing on the car’s underside. There’s a totally new steering rack while at the back there’s a new stiff twist-beam torsion bar – both are the most extreme parts of their type ever fitted to a performance Ford. The steering is also 14 per cent faster than the old Fiesta ST200.

Ford Performance has also fitted its Ride Control 1 valving; in layman’s terms the damping stiffens when you’re attacking corners and slackens off when you’re cruising. Torque vectoring springs have also been fitted to give a sharper turn-in; it’s all pretty clever stuff for a sub-£20,000 car.

A limited slip differential is available for the first time on the Fiesta ST, too; it’s a Quaife LSD and it’s bundled into the £850 Performance Pack which also includes launch control and ‘Performance Shift Lights’. Another first on the baby ST are driving modes – Normal, Sport and Track – each one ramping up throttle response, steering weight and exhaust noise the higher you go. In Track mode the traction control is switched off and the stability control is set to ‘wide-slip mode’. 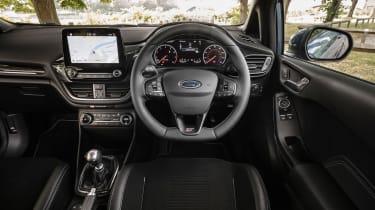 It’s under the bonnet where you will notice the biggest change. Gone is the old car’s 1.6-litre four-cylinder turbo engine and replaced by a downsized 1.5. It packs 197bhp and 290Nm of torque (with an overboost to deliver an extra 20Nm) but controversially it’s now a three-pot that can run on just two cylinders to save fuel. At less than 50 per cent throttle and between 1,200 and 4,500rpm one cylinder is shut off, improving fuel consumption by six per cent. You can barely feel the switch from three to two cylinders either – you only hear it.

While it sounds as though the ST has gone all environmentally friendly, it’ll still crack 0-62mph in 6.5 seconds (0.4 seconds faster than the old ST) and top out at 144mph. Ford claims a very reasonable 47.1mpg, too.

Behind the wheel the ST feels light and nimble; throw it into a corner and the front just grips and grips, but if you need to trim your line then just a momentary lift off the throttle or a dab of the brakes, and the back neatly swings round.

In Normal mode the ST feels well judged, but Sport adds a slightly snappier throttle and additional aural enhancement – more augmented noise comes into the cabin and you can hear the throttle popping on overrun. Track is the sweetest though as, with the traction control off and ESP in ‘wide slip mode’, you can revel in the lovely chassis balance. It’s just slightly infuriating that the drive mode button is awkwardly placed right down by the handbrake.

You can really feel the diff and the torque vectoring working to deliver the very best cornering response; press on even harder and those frequency selective dampers stiffen up the car so the ST corners as sweetly as possible.

However, the ST isn’t quite as agile as the old model – but it’s very marginal – and while the steering puts all of its rivals to shame, there is a tiny amount of dead feeling off-centre before and at times it feels a little too quick to self-centre. And while the engine is stupendously punchy for a three-pot, you can feel its urgency drop off around 5,500rpm where more engine noise tries to trick you into thinking its still pulling. The motor does sound rather good though even if it is rather too synthesised, but it can boom at high revs. 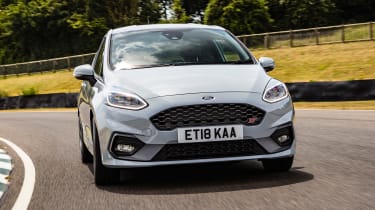 The cabin is a huge improvement; the ST benefits from the standard Fiesta’s improvements in build quality and infotainment (six-inch screen for ST-1 or eight inches for ST-3), but the old Fiesta ST’s excellent driving position, padded steering wheel finish and figure-hugging Recaro sports seats make another appearance on the new car. As you’d expect the run-of-the-mill Fiesta’s 292-litre boot is carried over meaning it’s a practical small hot hatch, and you can make it more practical still by going for the five-door model, which adds a reasonable £650 to the cost.

But to the question we set out to discover – does the ST ride well on British roads? Even the most ardent old Fiesta ST fan would quietly admit the suspension was slightly too stiff and engineers have addressed it with the new one. Thanks to those dampers and a generally softer set-up, the Fiesta ST does settle better on British b-roads. It can still get caught-out by potholes, cambers and expansion joints on motorways, but overall the ST is more compliant and easier to live with.

Does that take away from some of the fun? Hardcore ST fans will say yes, crying out that the previous ST was slightly more focused, agile and had a stronger engine. But others will enjoy the suspension improvements, plus the more tactile and much improved interior.

For us we probably fall into the first camp but the ST earns its place right at the top of the class, especially considering its price. Just like the old car the price tag is laughably low - £18,995 for the ST-1 is a true bargain and shames new rivals like the £17,995 Suzuki Swift Sport and the £18,995 Vauxhall Corsa GSi. Go for the ST-1, stick on the £850 Performance Pack and you won’t regret it.