The Suzuki Swift has been facelifted for 2020, but have the changes boosted its appeal? We find out... 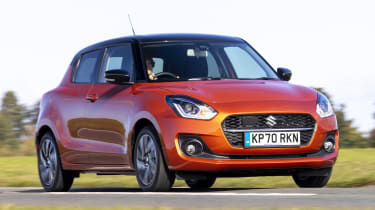 The Swift isn’t without appeal – especially in new SZ-L trim. But unless you really need the extra reassurance of four-wheel drive, this SZ5 ALLGRIP model at close to £19,000 is hard to justify. Lower down the range, the small dimensions and perky chassis give the Swift old-school charm, but sadly the hard plastics and firm and noisy ride also feel a bit yesteryear.

Suzuki has always done things a little differently, especially when it comes to cars with four-wheel drive. The Swift sits in a long line of small, affordable all-wheel drive cars, and now the latest model has had a mid-life update.

The tweaks apply to the whole Swift range with the only visual changes we could spot being LED updates to the front and rear lights and a revised grille with a chrome bar across the middle.

More important is the tech and safety boost across the range and a new high-value SZ-L model that gets some real big car kit – air con, alloys, adaptive cruise control, LED lamps, Apple CarPlay and Android Auto, privacy glass – all for £14,749; it looks like being a clear pick of the range.

Our SZ5 ALLGRIP gets even more bells and whistles with lane keep assistance and blind spot monitors, for example, but costs four grand more – quite a tough pill to swallow as it’s the only trim you can get if you want the extra grip of four-wheel drive.

As autumn heads into winter and the roads get even more slippery, the Swift’s ALLGRIP system adds real reassurance. There’s no extra ground clearance, but you do notice the improvement in traction when you’re pulling out of junctions, although we still managed a small amount of front wheel spin before the viscous coupling shifted the torque to the rear wheels. 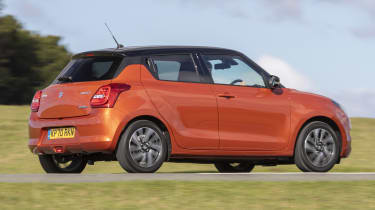 Not everyone wants the size of a 4x4, so the Swift remains an interesting all-wheel drive option, although close to £19,000 is a lot to pay for such a small car.

However, the same rule applies to the Swift family as ever: the more you have to pay, the less sense it makes. There haven’t been any improvements on the quality front – the cabin abounds with hard, shiny plastics – while the same problems with the firm ride and abundance of road noise still exist.

The 1.2-litre, 82bhp engine and long gearing don’t help to getting you excited, which is a shame because the small dimensions (for a modern supermini) and spirited handling are quite appealing – the Swift feels swifter than the figures suggest, while the quick steering and crisp five-speed gear change add to the fun.

If you don’t need huge amount of space in the back seats, and not everybody does, then the compact size of the Swift, with enough space in the back for kids and a reasonable 265-litre boot, will be quite appealing – as does the slightly old-school feel.

Don’t be fooled by the hybrid badge on the boot, though – this is a mild hybrid that won’t run on electric power alone. The 12v system just provides a little assistance when accelerating, improving mpg a little, which, for the record, drops from 57.2 on the standard car to 51.7 on the ALLGRIP thanks to the extra weight of the four-wheel drive system.