A turbocharged 1.4-litre engine addresses many of the complaints we had about the Suzuki Vitara compact SUV 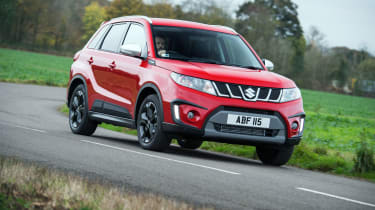 The new 1.4-litre turbo really does address one of the biggest criticisms of the Vitara. It now has that turn of pace to keep pace with traffic and as an added bonus it uses less fuel too. It’s a shame the engine is restricted to the range-topping S model, but then again, you do get a very likeable and reasonably roomy little car with plenty of kit.

The Suzuki Vitara is a very easy car to like. It’s handsome, built to last and represents rather good value for money. If there had been one criticism though, it was a lack of variety, with only a mediocre petrol and a gruff diesel engine to choose from. Now, however, there’s the Vitara S powered by an all-new 138bhp 1.4-litre turbocharged petrol engine and we’ve driven it for the first time.

The 1.4 turbo may be the smallest engine available in the Vitara – both the diesel and alternative petrol engine are 1.6-litre units – but it’s the most powerful and provides that injection of performance which has been missing.

It comes paired with Suzuki’s ALLGRIP all-wheel drive as standard and a six-speed manual gearbox, but will still return over 52mpg with CO2 emissions of 127g/km – trumping the naturally aspirated 1.6. 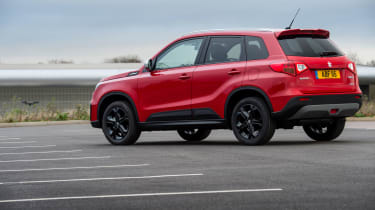 Whereas the 1.6 petrol engine needs revs to access its power, the downsized 1.4 turbo picks up far quicker lower down in the rev range, meaning more accessible performance. That extra yard of pace is immediately noticeable, especially when you’re accelerating out of slower corners and tackling inclines.

It also gives the Vitara far greater overtaking ability, with more in-gear shove thanks to the additional 64Nm of torque taking the total to 220Nm. In the 1.6 petrol you really have to time your manoeuvres, pick the right gear and be wary of distances as the engine just doesn’t respond as quickly as you think it will.

So some key issues have been resolved in the turbocharged Vitara S and, as a result, the car is much more relaxing to drive. Ease off on the motorway and the engine is hushed, while the ride is just as compliant as it was before shrugging off the worst of road imperfections. 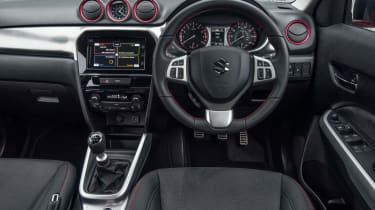 The 1.4 turbo is only available in the well-equipped Vitara S and Suzuki has no plans to make it an option in lower spec models, which is a shame because it’s definitely the engine of choice in the range. It means you’ll have to fork out around £21,000 to get your hands on it, although official pricing has yet to be confirmed.

While that may sound pricey there is plenty of kit as standard. You get sat-nav, Bluetooth, a reversing camera, adaptive cruise control, air conditioning, a DAB radio and LED headlamps. From the outside you’ll be able to tell it apart from lesser Vitaras by the 17-inch black alloy wheels, unique front grille and wheel arch extensions.