The tweaks to the 2019 Vitara haven’t transformed it into a new class leader, but the new 1.0-litre turbo petrol engine is a vast improvement over the outgoing 1.6. While the option of four-wheel drive will appeal to some buyers, we think the sweet spot in the range is the front wheel drive car: not only is it slightly quicker, but it’s cheaper to buy and run, too.

This is the newly-updated Suzuki Vitara. Three years since its launch, it’s been treated to a raft of updates to keep it fresh against newer rivals like the SEAT Arona and Hyundai Kona.

Perhaps the most important update of all is to the engine line-up. Out goes the old 1.6-litre naturally aspirated motor, replaced by a 1.0-litre three-cylinder turbo. The diesel has been dropped, but the previous 1.4-litre remains; the 138bhp unit is shared with the Swift Sport (albeit with 10Nm less torque) as is the six-speed manual gearbox.

The outgoing 1.6 was a keen and revvy unit, but with just 156Nm of torque at 4,000rpm, it took some work to extract the most from it. Not only does the 1.0-litre have a higher 170Nm maximum, but it produces all that from 2,000-3,500rpm. In the real world then, it takes much less effort to make progress, and fewer gearchanges, too. 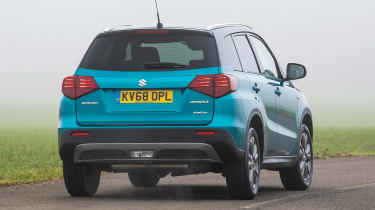 That’s a good thing because, as before, the five-speed manual isn’t the most pleasant to use. The shift is light, but there’s a grainy feel that puts you off shifting whenever possible. On the plus side, the 1.0-litre pulls just under 3,000rpm at 70mph, so – A-pillar wind whistle aside – refinement on a motorway is great. That’s helped by the fact that the engine is a smooth, refined unit in the first place.

The 1.0-litre is available with a choice of two or four-wheel drive, but just 31 per cent of buyers are expected to go for the latter. Unless you live in the Scottish Highlands, it’s hard to justify; the extra pair of driven wheels make it slightly slower (0-62mph takes 12.5 seconds), less frugal (it’s 3.7mpg thirstier in official tests) and (£1,000) more expensive.

Inside, the facelifted Vitara’s minor tweaks comprise a colour screen within the dials, an armrest between the front seats and some squidgy plastic on the top of the dash. Despite the changes, it still looks and feels a little cheaper than the class best.

From a design perspective, the 2019 Vitara’s external changes are subtle. The lower part of the front bumper has been redesigned and there’s a new grille with vertical, rather than horizontal, slats. The old rear lamps have been ditched in favour of new LED units, and new alloy wheels and paint colours are available. 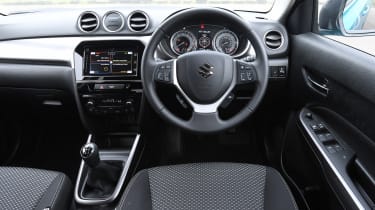 There’s also a raft of new safety kit. The likes of traffic sign recognition, blind spot monitoring and rear cross traffic alert are all new to both the Vitara, and the Suzuki range as a whole.

Elsewhere, the Vitara drives just like it did before. Ride comfort is towards the firmer side of the crossover class, though could never be called harsh. It lacks the ultimate body control of the SEAT, but it is slightly more comfortable.

The Vitara still champions value for money, undercutting many like-for-like rivals in this segment. Although the Citroen C3 Aircross – one of the best value compact crossovers and our current class favourite – has a lower starting price, that’s for a smaller, less powerful model. The £16,999 starting price places the Vitara on par with the equivalent Citroen.