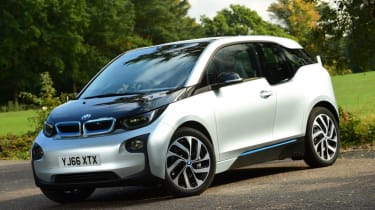 The car industry has never been developing at a faster pace than it is now, with electric vehicles leading the charge. As one of the very first of this new breed of cars, the i3 is impressive in many significant ways, but the oldest models are already rapidly dating. As such, your starting point when buying should really be the facelifted 94Ah model, unless you make mainly short, local journeys, or are happy stopping en route to recharge on longer trips. With more than 10,000 i3s sold so far in the UK, there are more of them available used than you might think. Apart from a few tales of woe, owners seem to be enjoying decent reliability as well. Great to drive, sharply styled inside and out, and very efficient, the i3 is a superb little car. But as with all BMWs, it’s a premium product, so you’ll be paying if you choose this model over a less pricey alternative.

When Nissan jump-started the EV market with the launch of its Leaf in 2010, it caused a lot of excitement. The Leaf was, after all, the first mainstream production vehicle that was designed, from the outset, to run on electricity rather than fossil fuels.

Almost a decade on, many EVs are still developed from cars conceived to be powered by conventional engines, but one of the more radical clean-sheet designs was the BMW i3, launched with a choice of pure- electric or range-extender powertrains. BMW has since given up on the latter, leaving only the all-electric i3 for new-car buyers – but does a used i3 of either kind make sense? 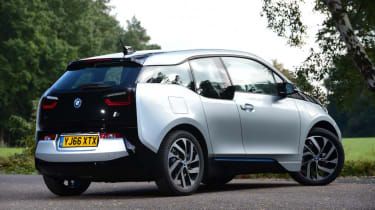 The latter version has a 650cc, motobike-derived, two-cylinder petrol engine, fuelled from a nine-litre tank. This unit only ever acts as a generator to charge the batteries; it never drives the wheels directly.

While the i3 range extender is more usable than the pure EV, you’ll pay a premium for one. But now that the range extender is no longer available from new, these models are likely to hold their value better than the electric-only versions, because there’s a demand for them on the used market. 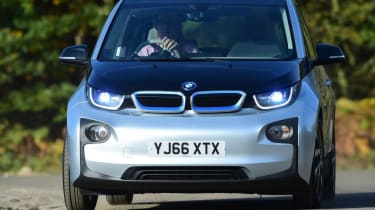 Alternatives to the BMW i3

Competitors for the i3 include the Nissan Leaf and Renault ZOE in terms of size, but neither of these can match the BMW’s unique, high-quality feel. A ZOE costs around half as much, so in some ways this actually makes it more impressive.

A Volkswagen e-Golf feels like a premium product and is great to drive, but it seems somewhat ordinary, because it wasn’t designed from the outset as an EV. The Hyundai Kona and Ioniq EVs are too new to directly compete with a second-hand i3 but, as well as pure EVs, potential buyers could consider a plug-in hybrid, such as the Golf GTE, Audi A3 e-tron or Toyota Prius Plug-in.

With some electric vehicles you must lease the battery pack each month, but the i3’s battery is bought outright with the car.

As standard the i3 only came with a trickle-charge option; faster chargers were available for those willing to spend a bit more cash.

The i3’s carbon-fibre construction means that even minor damage to the bodywork or chassis can be a major deal to put right.

The leather trim used in the cabin doesn’t seem to wear as well as the cloth version, and it also gets easily stained by black jeans.

Inside the i3 looks as hi-tech as it does on the outside and, thanks to the trendy rear-hinged back doors, getting in and out of the car is easy. There’s only room (and seatbelts) for four people, though, which may be a hindrance at times. The modern dash is a bit daunting at first, but you soon get used to it because it’s highly intuitive. The boot is quite small at 260 litres, or 1,100 with the seats folded. 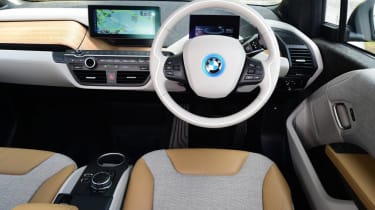 Thanks to the electric i3’s simplicity, only the brakes generally need attention, but its heating system contains long-life coolant. The i3 REx has two cooling systems (for the heater and engine) and its chain-driven engine needs an oil and filter change every two years or 12,000 miles, at a cost of £211.

Owners who purchased a £239 Service Inclusive pack got three years of check-ups, but the plan could only be bought up to the first service and can’t be extended.

The i3 has been recalled once so far, due to incorrectly calibrated sensors within the electric power steering system. These weren’t set up properly at the point of manufacture, so the driver was in danger of losing control when cornering. The fix only required a recalibration of the sensors. Just 41 i3s were affected by the campaign, and all were built in either October or November 2015.

The i3 hasn’t appeared in our Driver Power satisfaction surveys, but reviews on our sister site carbuyer.co.uk indicate what owners think. They rate it slightly lower than we do (3.7/5 compared with 3.9/5), with overall ratings skewed somewhat by two owners who have experienced lots of problems. Still, most drivers love the performance, build quality, reliability and usability.