The BMW i3 jumps in price, but upgraded batteries have almost doubled the range and it remains as good to drive as ever 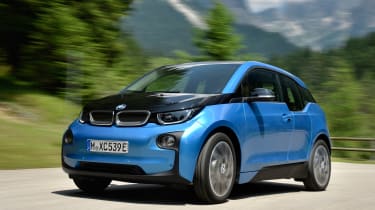 A boost in range can only be a good thing for the BMW i3, as the car remains just as good to drive and is as spacious as ever. There is a £2,150 price hike for the larger battery, but given that the range has almost doubled to 195 miles it seems like a fair premium. However, at £27,830, the all-electric i3 is still rather expensive to buy.

The BMW i3 has always been one of our favourite electric cars, mixing excellent performance, low running costs and futuristic styling. Now, BMW has upgraded the batteries on board to 94Ah (up from 60), giving the car extra range and faster charging.

The fully electric model now boasts a range of 195 miles, though, that will change in the real world depending on your driving style. However, it’s significantly more than the previous car’s range of about 100 miles – going some way to help alleviate the range anxiety that some owners face with an all-electric car.

For those wanting to travel even further, a Range Extender version is remains available. It features a small petrol engine in the back that charges the batteries as you go, and has a range of 276 miles. It’s more efficient than before as well, emitting 12g/km of CO2 rather than 13g/km. Crucially, though, it can be filled up at a petrol station in minutes.

More reviews for i3 Coupe

Still, the upgrade has also improved the charging time, so it’s easier to get going again once out of juice – and DC charging is now standard on all models. AC charging is now 50 per cent faster than the previous i3, taking as little as three hours to fully replenish the batteries.

That’s the extent of the changes to this model, though, you can now get the car in the same vibrant blue paint originally limited to the i8 sports car and there some new options for the interior materials. The i3 still looks great, especially in this new colour, and the interior quality is excellent. The recycled materials around the cabin feel well put together, and the large display screen is as pretty as ever, and reasonably easy to use via the control dial on the centre console.

Driving the i3 is like almost nothing else, thanks to the torquey powertrain and lightweight carbon-fibre body. Put your foot down and you’ll blast up to 30mph faster than most other cars on the road, and unlike its closest rival the Nissan Leaf the i3 doesn’t feel underpowered at higher speed either. 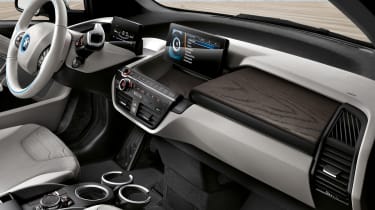 It’s fun to drive on a twisty road too, with decent steering feedback and surprisingly little body roll for a tall car - that’s the low centre of gravity at work, thanks to the under-floor battery pack. This is no sports car, but it’s good fun in its own way.

In town, the silent motor means it feel relaxed, though the ride doesn’t match, with potholes and undulations sending shudders into the cabin. It’s much smoother riding at higher speeds, though. The driving position is comfortable, and there’s enough legroom in the back for adults. Boot space of 260 litres (1,100 litres with the rear seats down) is good for an electric car, too.