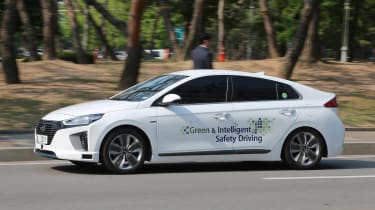 The Hyundai engineer in the driving seat of our prototype reckoned that urban vehicle autonomy is still “10 years away”, and the Ioniq shows not only how much the car can do already, but also how it can still struggle to deal with basic situations. However, Hyundai and lots of other manufacturers argue that highway (motorway) systems will be ready long before then - and if you imagine the hi-def mapping and the sensor technologies on board this car, in an environment where there are fewer external distractions, then that also seems realistic.

Hyundai is continuing to push ahead with its autonomous technology - and we’ve had a chance to sample the firm’s latest developments in the area with a ride in a self-driving Ioniq.

The Ioniq has been the base for Hyundai’s recent autonomous efforts. It released the first version of the car at last autumn’s Los Angeles Auto Show, and gave a practical demonstration of the technology at the CES electronics fair in Las Vegas earlier this year.

Our ride in the latest car was at Hyundai’s giant Namyang research and development base, where 13,000 engineers work on everything from electric powertrains to the N high-performance models. The site’s busy perimeter roads gave the Ioniq a good opportunity to show how it can cope with a complex urban environment, instead of the motorways that are better suited to existing systems. 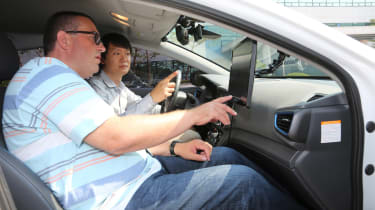 The latest self-driving Ioniq uses a forward-facing camera mounted at the back of the rear-view mirror, plus three lidar radar sensors - one in the front, and two at the rear. Unlike the CES car, which featured a stereo camera, the latest iteration of the vehicle has a less complex mono lens - showing that Hyundai is focusing on bringing down the potential cost of the set-up.

The Ioniq’s system relies heavily on high-definition mapping - and the test car has a computer monitor mounted ahead of the front passenger seat to show how the car is perceiving the world around it. The engineer says the system in this car couldn’t cope without the map data, and it’s easy to see why; the roads around Namyang are outlined in considerable detail, with even speed humps noted so it knows when to slow down.

However, the system is using its sensors to watch out for pedestrian crossings and stop lines, we’re told. And plenty of non-permanent objects appear on the monitor to show that the car has picked them up; it displays pedestrians and draws distinctions between moving vehicles and those that are parked at the side of the road. It’s even pretty happy to switch lanes or allow other traffic to merge into its path without a panic.

So the drive is actually a pretty polished experience; indeed, for much of our 20-minute journey at around 30mph, you’d be hard pressed to realise that the car is doing the work, were it not for the sight of the wheel twirling away, free from the driver’s hands. The system seems to make myriad small inputs, but the overall effect is pretty smooth. This is helped further by a gentle approach to the throttle; the Ioniq would need to be a bit more assertive if it was to avoid being carved up by most rush-hour commuters.

There are also a couple of occasions where the system gives you a proper reality check. The first is when a van travelling in front of us decides its wants to pull across traffic; the Ioniq gets reasonably close before standing on the anchors in a pretty abrupt fashion.

Then at the end of our run, the system spies pedestrians walking perfectly happily along a pavement on the outside of a corner and decides - presumably because the people are, for a moment, directly ahead of it - that it needs to stop. We’re static for a second or two before the perceived danger passes and the Ioniq moves away again - but it’s a telling reminder of how technology can still be flummoxed by situations we humans can reason away in a split-second.