Can the Toyota Prius AWD offer a quirky alternative to a typical SUV? 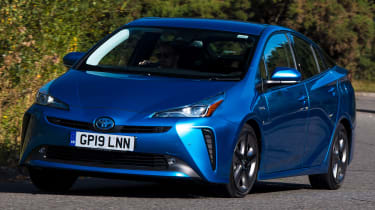 Following its mid-life refresh, the Toyota Prius remains a great car: brilliantly frugal, reliable and easy to drive. However, this AWD version doesn’t make much sense. The extra £1,650 pays for a car that is slightly slower, less practical and – going against its entire rationale – thirstier than a normal Prius, too. All for a car that reveals its traction benefits so infrequently on UK roads that most drivers will rarely notice. Just buy the standard Prius instead.

The Toyota Prius has become a hugely popular hybrid since it made its debut back in 1997. With good reason, too: they hardly ever go wrong, they’re easy to drive and, most importantly, they’re really cheap to run.

And now the biggest name in hybrid tech benefits from a refreshed exterior look and minor cabin tweaks in order to stay competitive against its main rival, the Hyundai Ioniq. There’s a new model joining the range, too.

This is the Prius AWD: the first hybrid Toyota outside of its SUV range to come with four driven wheels. The extra drive is supplied by a 5.3kW motor and inverter mounted to the rear axle, and is engaged at all times below 6mph to provide smoother traction when pulling away from a standstill. From six to 44mph it engages only when the car’s sensors detect front-wheel slip, while the rest of the time it operates in front-wheel drive mode. 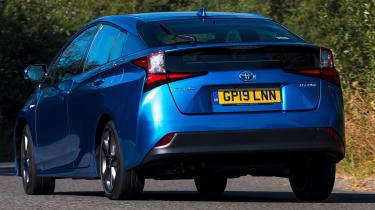 There’s no mechanical connection to the drivetrain at the front, which remains identical to the rest of the Prius range. That means the combustion element takes the form of a 1.8-litre petrol engine, while a front-mounted electric motor provides extra shove. A small 1.31kWh battery is topped up through a mix of regenerative braking and, occasionally, the petrol engine acting as a generator.

On the move, the Prius AWD behaves much the same as any other Prius. The powertrain is smooth, the steering light and precise, and the ride comfortable. Save for hard acceleration – when the engine revs rise to an unpleasant drone – refinement is great, too. The extra weight of the second motor dulls performance only very slightly, with the 0-62mph time increasing by three-tenths of a second. Still, it remains perfectly adept at both pottering around town in near silence, or sitting at a steady 70mph on the motorway.

Its main selling point is its fuel economy and, as ever, in this area the Prius absolutely excels. Our time with the AWD model revealed fuel economy in the high-sixties is possible at a cruise, while heavy stop/start traffic delivered results nudging 60mpg. The trouble is, the standard model is better still: CO2 emissions for the front-wheel-drive car are 3g/km lower (the gap grows to 10g/km if you go for the smaller 15-inch wheels), and it should use less fuel, too.

The front-wheel-drive Prius benefits from the same mid-life upgrades as this all-wheel-drive model. They tone down the curious looks of its predecessor; the headlights are more conventional and the bumper is a smoother shape than before, while the rear gets new tail lights and a new bumper. There are a couple of new colours and wheel designs to choose from.

Inside, Toyota has worked to improve the infotainment system. Loading times have reduced, and it can now recognise pinch and swipe motions to move through menus and maps. Improvements, yes, but pick any rival set-up - Kia/Hyundai, PSA, or the VW Group - and they all offer vastly superior tech.

The Toyota’s graphics are fussy, the interface clunky and the small screen is low down and not angled towards the driver which means that, not only is it more of a distraction to use, but on-screen info is often obstructed by a large, diffuse glare. Even the buttons around the outside feel cheap and fiddly. At least it’s easy to pair a phone through Bluetooth. 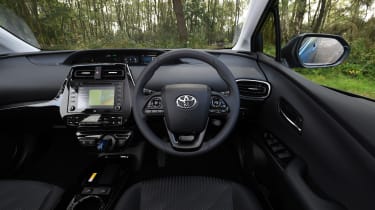 The digital dials aren’t great, either, blending a load of styles, colours and warning lights into a rather cluttered panel. The only positive is that the speed is displayed in a large and clear font, but that doesn’t matter much because the heads-up display, which can provide navigation instructions, is bright and clear and in your line of sight anyway.

Elsewhere, the Prius is a spacious car, just edging the Ioniq for legroom. The AWD’s extra motor compromises boot space slightly, though; the shallower 412-litre load bay is 45 litres smaller than in front-driven variants.

The AWD system is only offered in the Business Edition+ trim, which offers all you’d ever need in terms of equipment. The standard kit list includes dual-zone climate control, electric lumbar adjustment on the driver’s seat, wireless phone charging, a rearview camera, and LED headlights. Safety tech is well stocked too, with a forward-collision warning system that detects pedestrians, adaptive cruise control, lane departure warning, and road sign assist all included.

So should you get the all-wheel-drive model? Well, no. At £28,970, the AWD costs £1,650 more than the regular Prius. That’s £1,650 more for a car that’s thirstier and less practical than a standard Prius, and will only reveal its traction benefits in the rarest of circumstances.