Is the new Toyota Corolla a serious player in the hatchback sector? We drive the 1.8-litre hybrid option to find out...

The Corolla is Toyota’s best family hatchback for a long time, with an appealing blend of refinement around town, as well as a comfortable ride, precise handling and solid build quality. It has relatively few glaring faults compared with the opposition - although the hybrid powertrain still won’t please driving enthusiasts, and the infotainment system is plain awful. But buyers may look past these flaws, attracted instead by the appeal of low CO2 emissions and the resulting gains from everyday running costs.

The new Toyota Corolla looks like the right car at the right time – with hybrid powertrains across much of its range and a British manufacturing base.

We were impressed with the higher-powered version of the car when we tried it in late prototype form last autumn - but now we’ve had a chance to drive the regular petrol-electric hybrid in production form.

The Corolla is actually being offered with a choice of three powertrains - because despite initial statements to the contrary, Toyota GB has elected to offer a non-hybrid, 1.2-litre turbocharged petrol version of the car on some trim levels. There are three body styles, too, with the five-door hatch joined (again) by an estate and, in a novel development, a small (hybrid-only) saloon. 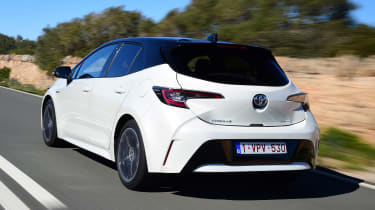 The vast majority of Corolla sales, of course, will be electrified, and Toyota is hoping to build on this trend by offering a choice of hybrids. There’s the 2.0-litre 177bhp set-up that we sampled in the prototype, and the more conventional (and more familiar, since it’s closely related to the Toyota Prius and C-HR) 1.8-litre configuration that we’re trying here. The total system power is 120bhp and the engine alone has 142Nm of torque – although the electric motor is constantly delivering varying amounts of its 163Nm.

The 1.8 Corolla’s performance figures are respectable, but no more than that. It’ll reach 62mph from rest in just under 11 seconds, which is only slightly quicker than an 84bhp 1.0-litre Volkswagen Golf. The Toyota’s top speed is 112mph.

But as is often the case, the Toyota’s trump card is efficiency. Even in the tougher WLTP test cycle, it manages anywhere between 55mpg and 65mpg, giving combined CO2 emissions (correlated across to NEDC numbers, as they have to be) starting at just 73g/km. There’s not a Ford Focus that can get within 15g/km of that. 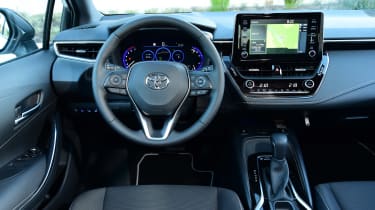 On the road, the 1.8 Corolla is a vehicle of contrasts. The Toyota New Global Architecture-based (TNGA) chassis is actually quite sweet - a logical development from the half-decent C-HR, and one that enjoys a lower centre of gravity. The set-up, incorporating MacPherson struts at the front and a multi-link configuration at the rear, is somewhere between a Focus and a Golf, with neither the outright agility and alacrity of the Ford, nor the cosseting comfort of the Volkswagen.

When you think about it, though, that’s still an appealing compromise; the Corolla is composed in corners and, in the most part, pretty compliant on all but the worst road surfaces; your choice of trim level and wheel size can help further with this, evidenced by our experience of the car on 17-inch and 18-inch alloys. We’d like a touch more response in the first half-turn of lock, but that aside, the steering is pleasingly direct, albeit without much communication.

There’s tantalising hope of an involving drive, then - but sadly, the hybrid set-up isn’t as willing to play ball as the chassis is. Toyota continues to make improvements to the CVT transmission at the heart of its hybrids but there’s no overcoming the fact that the engine’s behaviour is not directly connected to what you do with your right foot. Or, for that matter, the driven wheels. 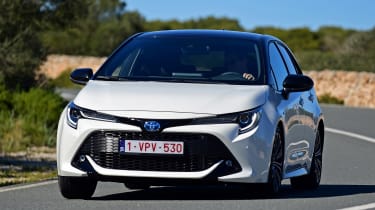 There’s a caveat to this, of course. Approach the Corolla looking for a B-road weapon and you’ll be sorely frustrated and disappointed, true. But take a relaxed approach and Toyota’s efforts to cut down the number of rev-soaring ‘rubber-band’ moments pay dividends. In smooth, unhurried driving, there are more moments than ever when the Corolla feels like a regular torque converter automatic. It is at its best around town, really, where a patient driving style will allow you to get between plenty of junctions and traffic lights using next to no petrol at all.

And if you are happy to wait a teeny bit longer to get up to speed on the motorway, the 1.8 will reward you with relative calm. There’s a bit more road noise and rumble through the chassis than we’d like, but wind noise is well suppressed and at 70mph, and by pulling just over 2,000rpm the petrol engine remains polite.

Inside, there’s a plentiful supply of padded, double-stitched materials and a smart, logical facia design; Toyota’s infamous LCD clock has finally disappeared – replaced by the display that’s part of the infotainment system anyway. The rear isn’t the most spacious on the market - Skoda’s Octavia has that pretty much tied up - but it’s roughly on a par with what you can expect from a Focus or a Vauxhall Astra. 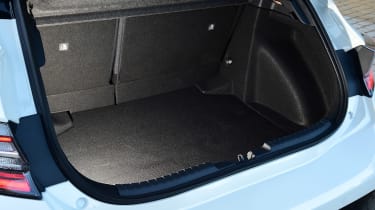 The boot capacity isn’t all that impressive, either. You’ll find 361 litres on the 1.8, about 20 litres up on the space offered by the Focus but almost 100 litres down on Skoda’s forthcoming Scala. It’s also worth pointing out that the 2.0 Corolla manages just 313 litres, because its 12V battery has to go under the boot floor.

Elsewhere, Toyota has piled on the tech in the cabin – and yet it still manages to miss the mark. That eight-inch infotainment display is admittedly crisper than what we’ve seen from many of the firm’s recent offerings, but the interface is still clunky and old-fashioned. There’s still no Android Auto or Apple CarPlay integration, so you can’t even bypass the in-house system. Toyota sources say this smartphone connectivity (standard on even city cars from rival brands) is on the way, and we hear rumours that this could happen by the start of 2020. But even then, there no guarantees that it’ll be available to existing customers as a retrofit option. Smartphone users, consider yourselves warned.

Toyota will be hoping, though, that the car can trade strongly on its ownership proposition. Those CO2 emissions will give it strong appeal to company car choosers, thanks to low Benefit-in-kind tax, and it comes with Toyota’s five-year, 100,000-mile warranty.

Indeed, the initial figures look pretty promising. Based on Toyota’s representative deposit of 27 per cent, the 1.8 Design Hybrid we’ve driven here should cost £225 per month on a PCP deal. And a company car chooser could save around £1,500 on tax alone over three years compared with a Golf or Astra.