The impressive MINI Countryman S E plug-in hybrid SUV arrives in the UK, but how does it drive? 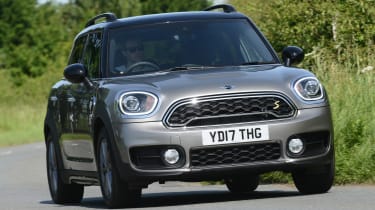 MINI is on to a winner with its first plug-in hybrid. It’s a compelling ownership proposition and one that offers very little compromise over a similarly priced petrol car. Mitsubishi has seen unprecedented sales success with its Outlander PHEV, but the Countryman moves the game on by offering a usable electric range with a genuinely rewarding drive and acceptable practicality.

The BMW Group’s electric car roll-out isn’t just limited to models wearing the blue and white roundel. In addition to the new hybrid 530e, the maker is now launching its first production plug-in MINI – and we’ve driven the Countryman S E ALL4 in the UK for the very first time.

We first tried the car on European roads last month and came away impressed by the hybrid SUV. It represents undeniable appeal for town dwellers who want emissions-free driving in a desirable crossover body, with the added dependability of a small petrol motor. MINI says 90 per cent of its buyers drive only 30-40 miles per day, making a compelling argument for this latest Cooper S E ALL4.

But far from being a car that needs confining to city limits, the Countryman handles well on the open road, too. Faster driving sees the 25-mile EV range drop quite quickly, but the boost from the 87bhp electric motor gives the MINI a surprising turn of pace. The Cooper S badging is a little deceptive, however, as it can’t match the pure petrol car for driving thrills. 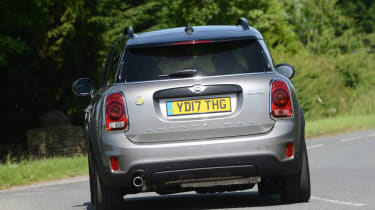 That said, the quiet three-cylinder turbo works well with the electric motor, while the six-speed auto is smoother than the BMW 530e’s occasionally jerky set-up. The PHEV retains the standard car’s agility, with weighty steering and tight body control. In fact, in Max E-Mode, this Cooper S E is effectively the first ever rear-wheel-drive MINI, as the front wheels are only powered with the engine engaged. But most people will buy the MINI for the potential cost savings, and if your driving habits allow, then the hybrid Countryman could be a very cheap car to run.

Emissions of just 49g/km mean it falls into the lowest Benefit in Kind company car tax bracket (nine per cent), and while it can’t match the larger Mitsubishi Outlander PHEV’s 166mpg, the MINI’s lower list price ensures it escapes the £310 road tax surcharge for cars costing over £40,000. 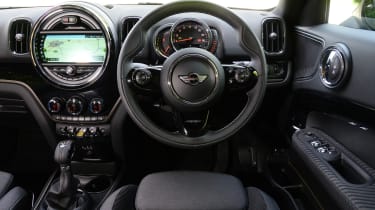 It’s not as big as the Mitsubishi, granted, but MINI bosses are hoping to steal sales from the Outlander. The Japanese maker has seen huge success with its car, but the more desirable Countryman should appeal to those after a trendier look.

And the MINI offers more than just an upmarket badge. The interior is covered in soft-touch materials, with the brand’s trademark toggle switches and rounded central screen present and correct. Standard kit includes air-con, sat-nav, DAB radio and Bluetooth, plus alloys and cruise control. The 405-litre boot is 45 litres smaller than in the standard car, but space in the back seats is unaffected.