Verdict on the new BMW 530e iPerformance hybrid; the first 5 Series that can be plugged in 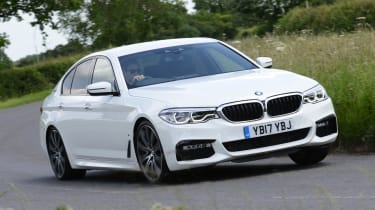 BMW has big plans for its plug-in range and this latest 530e is a pleasing sign of things to come. It represents a key stepping stone for the maker’s forthcoming all-electric models, and works well in daily use. Our favourite exec car just added another string to its electrified bow.

BMW’s plug-in charge continues with the launch of its latest hybrid 5 Series. Its electrified car sales are up 86 per cent year-on-year, with the maker on track to shift 100,000 plug-in or EV models in 2017.

As we confirmed when we drove the 530e in Europe in April, you’ll need regular access to a charge point to achieve that figure, but the modest range should be enough for most commutes. Charging from empty takes around three hours from a dedicated wallbox or public fast-charger. 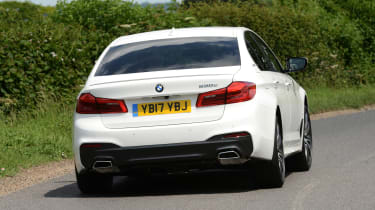 BMW is hoping this new iPerformance model will appeal to private buyers, too. Priced on par with the 530d diesel, the PHEV not only offers huge tax savings, but the Government’s plug-in car grant shaves another £2,500 off the list price.

It’s a refined cruiser, too. Leave it in Auto eDrive mode and it’ll seamlessly switch between electric and petrol power, while Max eDrive prioritises battery propulsion up to 87mph. You can even use the engine to charge the cells for use later in your journey, although doing this will see fuel economy plummet. The steering is light but direct, while body control is very good. You get the same rear-driven feel as you do in the diesel, plus the ride is satisfactory, if a little firmer than usual. The smooth auto box is lifted from the standard car, but doesn’t slur changes quite so efficiently. Of course, in the car’s EV setting the 530e offers instant, uninterrupted and silent acceleration. 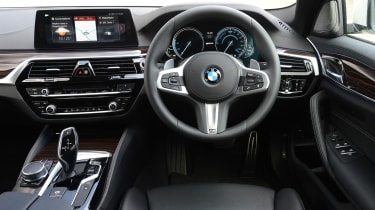 Inside, the 530e lifts our favourite large exec’s cabin unchanged, with the same high-quality dashboard, comfortable seats and intuitive infotainment system. The only hint at the car’s plug-in powertrain is the eDrive button by the gearlever and the bespoke digital dials. Externally, the badges, blue brake calipers and the extra charge port give the game away.

The biggest compromise comes with boot space, which is down 120 litres when compared with the standard 5 Series. It’s less of a dent than you’ll find in a Mercedes E 350 e, though, which loses 140 litres to its diesel sibling. Split-folding rear seats are a £335 option, but there are no plans for a more practical 530e Touring estate.