The Mercedes E-Class gets a plug-in hybrid option for the first time, and we try it on British roads 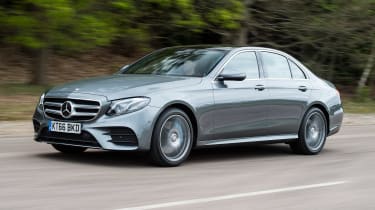 A plug-in E-Class is likely to find favour with company car drivers rather than private buyers, purely due to the tax savings on offer. The E 350 e is a convincing effort nonetheless, with decent performance, great efficiency potential and loads of technology on board. It’s just as comfortable and classy as the standard car, too. The new BMW 530e could put up a real fight against the Mercedes when we try both models back-to-back in the coming weeks, however.

For two decades now, if you were given an executive saloon as a company car it would have almost certainly had a diesel engine. The market has been skewed toward the black pump for efficiency and tax savings, but now there’s a breed of petrol plug-ins entering the fray. And we’re testing the latest one, the Mercedes E 350e, for the first time in the UK.

Like the BMW 530e, this is the first E-Class with the ability to add juice via a plug socket. The previous hybrid E, the diesel-electric E 300 BlueTEC, relied on a traditional non plug-in system, so only claimed 67mpg.

The E 350e claims 134mpg and 57g/km, which is slightly down on the BMW but is still impressive for an executive saloon. As a result it has an 11 per cent Benefit in Kind (BiK) rating, benefitting company car drivers greatly. The BMW is cheaper to tax still, however, falling in the nine per cent bracket. 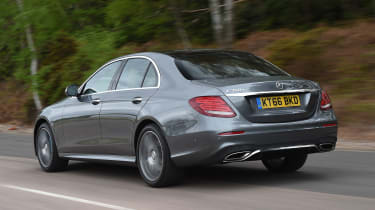 Mercedes claims a fully charged E 350e can do 21 miles on its battery alone, and although we found that to be more like 15 miles in the real world, it’s still a useful amount of pollution-free driving. The 530e manages around 10 miles more, though. and both take around three hours to charge via a standard plug.

The E 350e also features a 2.0-litre petrol engine, which combined with the electric motor produces 282bhp and 550Nm. That pulling power is felt best off the line, where the Merc glides quickly and quietly up to speed.

Push down on the throttle and the petrol engine will kick in to offer extra pace, but it’s not as refined as you might hope; a rather dull and noticeable four-pot drone accompanies every overtake. Above 60mph, the motors have less effect and the car doesn't feel as brisk.

Once the battery is drained you’ll struggle to better 35mpg, which is about 10mpg worse than a similar diesel. Keep it topped up and only use it for shorter journeys and that will improve considerably, however. Toggling between modes will also help preserve the battery. You can prioritise electric running, save the battery for planned use later or compromise with an optimised mix of the two in hybrid mode; the latter is our mode of choice for normal running. 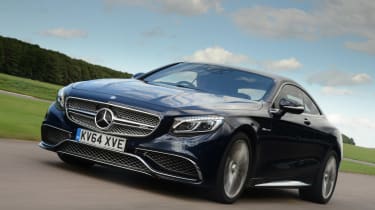 The E 350e is around 250kg heavier than an E 220d, which can be felt in bends with more body movement than regular variants. It’s not as nimble as the 530e as a result, despite strong brakes and decent weight to the steering. There’s a slightly smoother, more composed ride than the BMW though, despite our test model’s 19-inch wheels causing the odd pothole to filter through to the cabin.

The only visual differences between the hybrid and a standard E-Class are the blue brake calipers, badges and a charging port in the rear bumper. Two trims are available, but even the entry SE costs more than £45,000.