How does the all-new BMW 520d xDrive perform on UK roads? We find out... 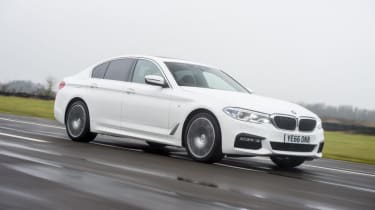 The BMW 5 Series has shot straight back to the top of the class. With its blend of comfort, refinement, technology, low running costs and engaging driving dynamics, the newcomer is arguably one of the greatest all-rounders money can buy. Our xDrive model delivers confidence-inspiring all-weather appeal, but for most people the more efficient two-wheel drive 520d could just be all the car they’ll ever need.

Fashions come and go, but the executive car class remains as fiercely fought as ever. And for the best part of five decades, the BMW 5 Series has been battling out for top honours.

However, in the past year or so a glut of new contenders has come along and taken the BMW’s crown. First it was the Jaguar XF, then it was the turn of our reigning champ the Mercedes E-Class. As a result, the stakes are high for this all-new seventh generation 5 Series.

Still, the newcomer certainly has all the raw ingredients to succeed. For starters, it’s based on the OKL platform that also underpins the 7 Series, and while the 5 Series doesn’t get the Carbon Core technology from its big brother for cost reasons, there’s plenty of aluminium in the structure, body panels and chassis parts. 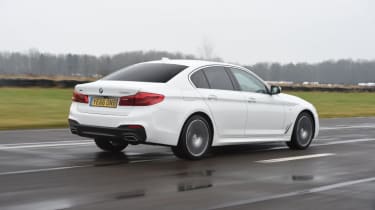 The use of lightweight alloys means the BMW is around 100kg lighter than its predecessor, which bodes well for handling and efficiency. There’s even a system available called Integral Active Steering, which can turn the rear wheels by a few degrees for extra agility at low speed and greater stability at higher speeds. At £995 it’s expensive, but it’s supercar tech in a diesel family saloon.

Other technical highlights include the £2,250 Driving Assistant Plus, which delivers semi-autonomous driving both in traffic jams and on the motorway.

So, with all this focus on technology, does the new 5 Series deliver on UK roads? To find out, we grabbed the keys to a 520d xDrive in popular M Sport guise.

The first thing you’ll notice is that the 7 Series links go further than the tech and underpinnings, because at a glance the 5 Series looks very like its big brother. At the front there’s the same bold LED headlamps treatment and wide double kidney grille, while the front wings feature a similar chrome trim strip behind each wheel. 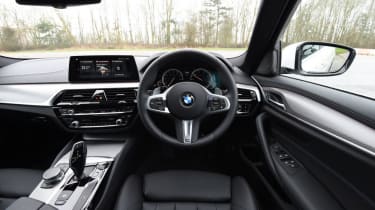 This familiar feel continues inside, where the 5 Series shares the same wraparound dashboard treatment and slick and configurable TFT instrument pack. Quality is top notch, with upmarket materials used throughout and flawless fit and finish – it’s more than match for the Mercedes E-Class in this regard. And as you’d expect from BMW, the layout of the controls is spot on, while the switchgear operates with crisp precision.

Highlights include the latest infotainment system that uses a large 10.25-inch screen mounted on top of the dash. The trademark rotary controller can be used to access all the functions, but the set-up also gets an upgrade of the gesture control tech first seen on the 7 Series. Simply wave your fingers and hands in front of the centre console and you can adjust the stereo volume, access menus, accept incoming phone calls and much more besides.

Prod the starter button and the 2.0-litre diesel fires unobtrusively and settles to a quiet idle. Part of this hushed character can be attributed to the brand’s SYNTAK technology, which essentially encases the engine compartment in soundproof material. It works just as well on the move, as even when worked hard the powerplant is no more intrusive than the larger six-cylinder used in the 530d. 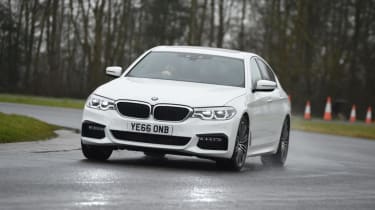 Performance is stronger, too. The combination of standard eight-speed gearbox and a healthy 400Nm of torque mean the BMW will sprint from 0-62mph in a brisk 7.6 seconds. Its speed off the line is helped by its xDrive four-wheel-drive system, which delivers great traction. Better still, the gearbox shifts smoothly in automatic mode and delivers crisp changes using the steering wheel mounted paddles.

Turn into a corner and it’s clear the latest 5 Series has lost none of its predecessor’s agility and engagement. It doesn’t react quite as quickly to steering inputs as a Jaguar XF, but the electrically assisted set-up is perfectly progressive and well-weighted.

There’s loads of front grip to lean on, while the electronically controlled all-wheel drive system delivers limpet-like traction on the exit of a bend, inspiring confidence in even the slipperiest conditions.

Our car was fitted with the £985 Variable Damper Control, which is well worth the extra outlay. In Sport mode, the damping doesn’t feel too much firmer until you enter a corner, where you notice the tauter body control and greater resistance to roll. Yet select Comfort and the BMW rides bumps and potholes with remarkable suppleness, even on our car’s optional 19-inch alloys (18-inch rims are standard).

The suspension is hushed too, with very few thuds and knocks making it through to the cabin. This refinement extends to the rest of the car, where wind, tyre and engine noise are very well suppressed. 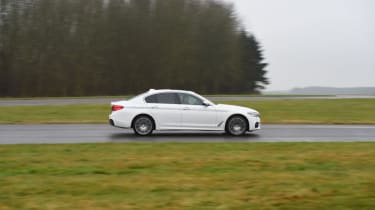 Adding to the feeling of first class travel is the space. A 7mm stretch in wheelbase means the 5 Series easily rivals the Mercedes E-Class for rear legroom. Up front there’s acres of space, while the driver gets a wide array of seat and wheel adjustment.

The only area where there’s been no real advance is the boot capacity, which at 530-litres is ten litres down on both the Mercedes E-Class and Jaguar XF.

For business users it will be the figures for the CO2 emissions that matter the most, and in this regard the BMW is extremely competitive. Our four-wheel drive model emits 124g/km, but go for the rear-wheel drive version and this drops to 108g/km in entry-level SE guise. And it’s this model that’s probably pick of the bunch as not only is it the most affordable model, it comes with all the kit you’ll need. For instance, sat-nav, climate control, LED headlamps, leather trim and heated seats are all included.