Third electric Hyundai Ioniq model slots between standard hybrid and full EV, but what's it like to drive? 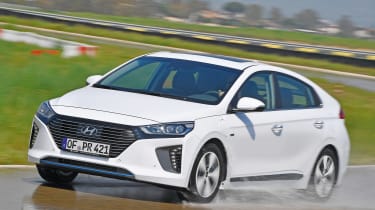 Impressive efficiency targets, a roomy cabin and no doubt an affordable price tag mean that the new Hyundai Ioniq Plug-in should prove to be an attractive proposition when it arrives in showrooms in the UK this summer. If the extrovert styling of the Toyota Prius Plug-in puts you off, and you can overlook a few perceived quality issues and the rather flat driving dynamics of the Hyundai, then the conservative but economical Ioniq PHEV could be well worth a look.

With diesel a seemingly dirty word these days, if you’re after an efficient family car, then a plug-in hybrid could be the way to go. They balance a usable range, low CO2 and good fuel economy, but without the range anxiety of a fully electric car.

Building on the all-electric Ioniq and Ioniq Hybrid, Hyundai has now added this plug-in version to the line-up. This increases the all-electric range of the standard hybrid with a bigger 8.9kWh battery pack, and improves efficiency in the process.

Any hybrid has to be about the numbers, and the Ioniq PHEV’s are fairly impressive. The car is yet to be officially approved for sale, but Hyundai is targeting 257mpg and CO2 emissions of 26g/km. These figures are impressive, but does the car work in the real world? 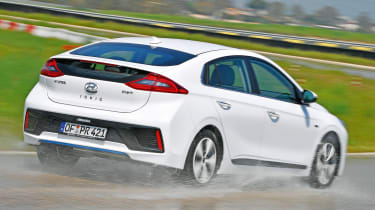 A more powerful 60bhp electric motor is paired with the same 104bhp 1.6-litre naturally aspirated petrol unit as in the standard Hybrid. Performance figures are yet to be confirmed, but expect the PHEV to sprint from 0-62mph in just over 10.5 seconds. However, brisk acceleration around town is arguably more important.

The Ioniq doesn’t feel as though it has the instant punch of the Toyota Prius Plug-in, the Hyundai’s closest rival, but squeeze the throttle – being careful not to wake the petrol unit – and the Hyundai isn’t exactly sluggish off the line. But once rolling, it doesn’t have the instant response or effortless surge of the Toyota.

It’s quick enough thanks to the supporting petrol engine, which is relatively refined, but the six-speed dual-clutch box feels hesitant on upshifts and can take a while to respond if you ask for a burst of acceleration. Take a more relaxed approach, and it’s a soothing way to travel. 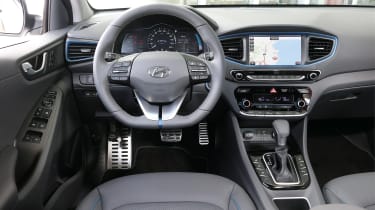 You can cut the petrol engine out of the equation altogether with a new feature for the PHEV; there’s now a button that forces the Ioniq to run in EV mode, with a claimed zero-emissions range of up to 39 miles.

The default hybrid mode manages the switch between electric and petrol motors smoothly, with the software more keen to stick to electric-only propulsion than in the regular Ioniq Hybrid. But the same can’t quite be said of the brakes. The shift between the electric motor’s regenerative braking to top up the battery and the car’s standard discs feels more binary than a slick transition, although some careful modulation of the pedal means it’s still easy enough to slow gradually.

With tall eco tyres the Ioniq isn’t the most agile, and isn’t helped by lifeless steering. The Ioniq isn’t about driver appeal, though, so while we still experienced some harsh reactions from the Hyundai’s dampers over cut-up surfaces on our test route, comfort is good and the car will accommodate five with decent rear leg and headroom. We expect an identical 350-litre boot to the Ioniq EV, so there’ll be lots of storage space.

Full specifications for the Ioniq PHEV will be released closer to its summer launch, but we know it’ll get LED lights and special 16-inch alloys, while inside the same user- configurable digital dash features, along with Apple CarPlay and Android Auto as part of the eight-inch touchscreen infotainment system. However, quality doesn’t match the expected level of kit, as the cabin is clad with harsh-feeling, solid plastics without many soft-touch surfaces. These buzzed noticeably over bad roads in our car.

Recharge times haven’t been confirmed either, but expect it to take around 2.5 hours for a full top-up using a home wallbox. You’ll have to plug the Ioniq in regularly if you want to maximise efficiency and get anywhere near the targeted economy, which is a caveat with any PHEV.