The Citroen C-Crosser is good looking and practical, but it's expensive 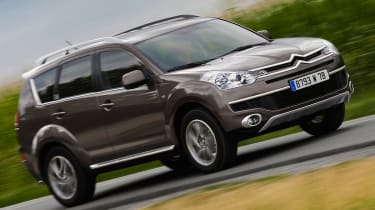 The Citroen C-Crosser is the French maker’s first compact SUV. It’s something of a cheat for Citroen, though, as it’s basically a Mitsubishi Outlander with a new curvy nose. However, don’t write it off just yet. Under the bonnet is a smooth and powerful 2.2-litre diesel, which is more than up to the task of towing trailers or horse boxes. Inside, there’s seven seats, although the rearmost pair are only really big enough for kids, and the C-Crosser is only offered in high spec levels and is expensive, but you get plenty of standard kit for your money.

You don’t buy a 4x4 to keep up with hot hatchbacks, but the Citroen C-Crosser performs more like a car than an off-roader in corners. There’s lots of body roll, but the steering is accurate, and the powerful 2.2-litre diesel means the C-Crosser can sprint away from the lights or overtake slow moving traffic without fuss. Part-time four-wheel drive is standard, and most of the time power is sent to the front wheels, but there’s a dial on the centre console that allows the driver to lock the diffs for slippery conditions.

The Citroen C-Crosser is offered in high-spec VTR+ and Exclusive trims, and prices start from around £25,000. That’s a lot of money, but you do get plenty of standard kit, with top-spec cars getting sat-nav, leather and a 30Gb music hard drive. The 2.2-litre diesel is powerful, but it’s not bad for economy and emissions. It returns 42mpg, while emissions of 175g/km are similar to the Hyundai Santa Fe and Chevrolet Captiva. However, crossover models such as the Nissan Qashqai+2 and Kia Sportage fare better.

The Citroen C-Crosser is one of three cars resulting from a joint venture with parent firm PSA Peugeot Citroen and Mitsubishi. The other two are the Peugeot 4007 and Mitsubishi Outlander, but we think the C-Crosser is the best looking of the trio. All three cars are the same from the front wheelarches back, but the C-Crosser’s curved nose, wraparound headlights and double chevron grille help it stand out. Inside, only the badges distinguish each car, and unfortunately Mitsubishi took the lead for the cabin design, so the C-Crosser is rather bland with lots of hard plastics. It’s a far cry from the stylish cabins found in the firm’s DS models.

The Citroen C-Crosser is a seven-seater, but the rearmost seats are best left for children, as there’s not much room in the back. Using all seven seats means there’s no room for luggage, too. Up front, the C-Crosser is comfortable, and there’s plenty of room for three across the rear bench seat. The boot is 510 litres in size, while the lower half of the split tailgate can double as a seat and allows bulky items to be slid easily into the boot. The C-Crosser can tow a maximum of 2,000kg.

Citroen doesn’t have the best reputation for reliability and build quality, but the C-Crosser is essentially a rebadged Mitsubishi Outlander – it’s even built in Japan on Mitsubishi’s production line – so the C-Crosser should be more reliable than the average Citroen. It’s covered by a three-year/60,000-mile warranty, but Citroen doesn’t offer any fixed-price servicing deals on the C-Crosser. 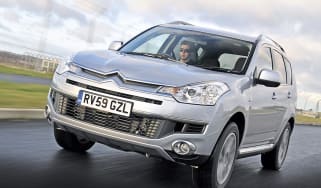 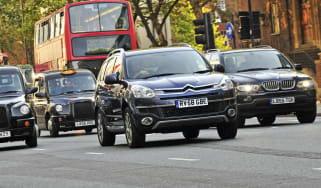 Despite its large dimensions, our SUV is a top choice for town driving.
Citroen C-Crosser: 11,018 miles 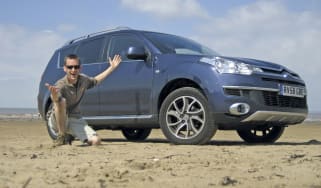 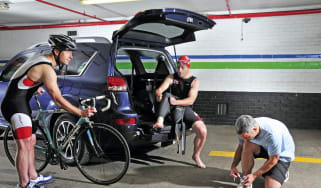 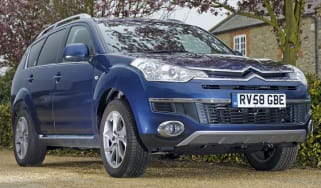 Second Report: From SUV to MPV – at a squeeze!
Citroen C-Crosser 2008 - long-term test 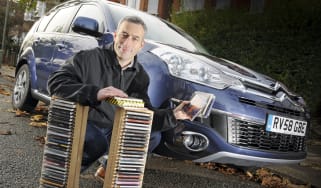 With its hi-tech stereo system and versatile cabin, Citroen’s new 4x4 is music to our ears
Citroen C-Crosser 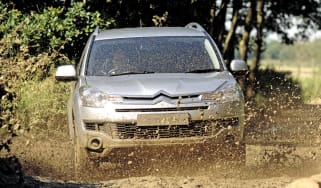 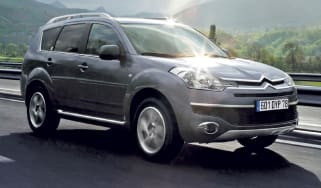 Citroen's first SUV comes with off-road looks, seven-seat versatility and car-like handling to make it an enticing proposition
Skip to HeaderSkip to Content