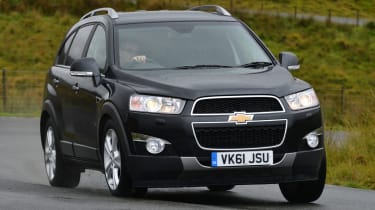 The first-generation Chevrolet Captiva offered buyers a lot of car for their money. It was a large, seven-seater SUV with powerful diesel engines and decent off-road capability thanks to its four-wheel-drive system. A facelift in 2011 brought revised looks and simplified the engine line-up down to just a single diesel.

Two models are available: an entry-level, five-seat, two-wheel-drive version and a high-spec, seven-seat, four-wheel-drive one. Although all Captivas are comfortable and well equipped, they don't lead the class when it comes to efficiency and the range-topping LTZ specification can be quite expensive.

A stiffer suspension and thicker anti-roll bars were among the additions made as part of the 2011 facelift to improve the Captiva's handling. You still wouldn't call it a fun car to drive, however. Although the Captiva handles well, it lacks the poise of the best handling SUVs on the market. On the plus side, the 2.2-litre diesel engine is smooth and powerful in either 161bhp or 182bhp form.

Models with four-wheel-drive get standard hill-descent control and grip better in slippery conditions, but aren't noticeably quicker than the two-wheel drives. We normally prefer manual gearboxes, but the Captiva's notchy six-speed manual transmission means the automatic is the one to go for here, even if it can occasionally be slow to respond.

As a large, heavy SUV, the Captive is unsurprisingly expensive to run, with relatively high emissions and poor fuel economy. The lower powered entry-level model should return around 44mpg and emits 170g/km of CO2, but if you choose an automatic gearbox, those figures drop to 36.6mpg and 203g/km respectively.

On the plus side, you can take care of warranty cover, breakdown assistance and servicing in one package thanks to Chevrolet's five-year Triple Care scheme. The Captiva's residual values are less positive, however – you can only expect it to retain a third of its value after three years of ownership.

The 2011 facelift greatly improved the original Captiva's somewhat anonymous looks, and it's now one of the more handsome family SUVs you can buy. A large square grille, rugged plastic body mouldings and black roof rails all help it to stand out in suburban car parks, but some may find the aggressive styling a bit full-on for their tastes.

Both the LS and LT models come with 17-inch alloy wheels as standard, while the range-topping LTZ sports larger 19-inch rims as well as aluminium skid plates, full leather upholstery, dark privacy glass and fog lights. The entry-level LS seems quite spartan by comparison – it does without items such as cruise and climate control. Also, the design of the cabin feels dated and material quality isn't on par with what you'll find in rival models.

If your priority is boot space, choose the five-seater Captiva. It can hold 465 litres of luggage with the rear seats in place or 1,565 litres with them folded down. The seven-seater model's boot space obviously suffers with all three rows of seats in place, but you can fold the rearmost chairs into the boot floor, so it's pretty flexible. Adults would be advised to avoid the boot seats for all but the shortest of journeys, but they're ideal for kids. Plus, the middle row seats tumble forward to give easy access to the rearmost row. This useful feature is absent on some of the Captiva's key rivals, such as the Hyundai Santa Fe.

Safety is a strong point for the Captiva – it scored the maximum of five star in the Euro NCAP crash test and packs plenty of standard safety equipment. Hill-start assist, hill descent control and traction control also boost safety in wet or muddy conditions. Mechanical reliability is generally good, but some buyers may be disappointed at the less-than-robust nature of the interior fit and finish. 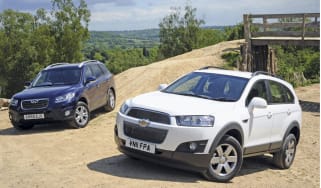 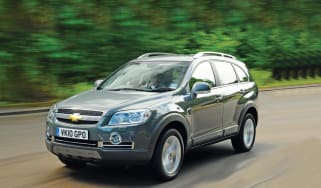 New flagship SUV gets huge spec list – but is it a winner?
Chevrolet Captiva 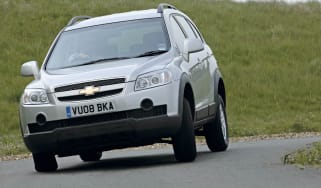 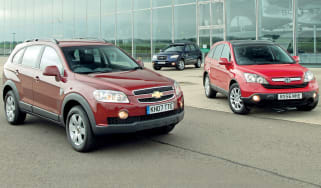 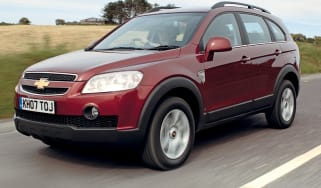 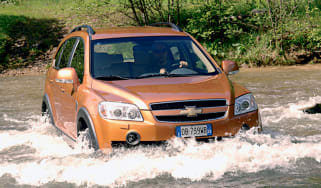 The Captiva - Chevrolet's first 4x4 - has finally hit Europe and Auto Express was first to get behind the wheel!
Chevrolet Captiva 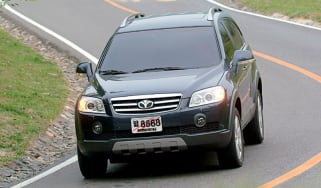 The new Captiva's good-looking, has a wide model range, plus a great diesel engine
Skip to HeaderSkip to Content