New flagship SUV gets huge spec list – but is it a winner? 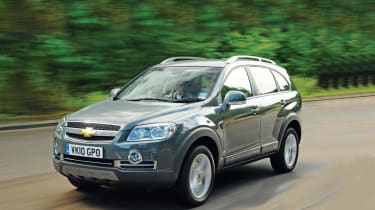 A smooth, efficient diesel powerplant, along with bags of room and smart styling, make this model an extremely credible contender in the SUV market. Handling may not be its strong point, while the vague steering lets it down on the road, but there’s plenty to appreciate about the Captiva. And while the £28,145 price tag seems expensive, not many other cars currently on sale come with quite so much equipment as standard.

HERE is the car that Chevrolet hopes will capture a whole new type of customer. The Captiva LTZ is a luxurious new range-topping version of the full-size SUV. It goes on sale alongside the existing LS and LT – but does its long list of standard kit enhance the car’s appeal?

Body-coloured bumpers, foglamps and unique rear lights enhance the Captiva’s chunky looks. They also boost its premium feel, although next to more quirky rivals, the design is fairly anonymous. Inside, it’s smart and well laid out, and while some plastics feel a little cheap, the cabin is certainly one of the high points.

There’s seating for seven, but the rearmost chairs are suitable for children only. When they’re in use, the boot has a mere 85 litres of space; fold them and it rises to 465 litres, and with all five rear seats down, there’s 1,565 litres.

Most noticeable, though, is the astounding amount of kit on offer. The Captiva comes with full leather, climate and cruise control, an electrically adjustable driver’s seat, sat-nav and a reversing camera with parking sensors.

On the road, soft suspension means the car is comfortable, but there is a dynamic trade-off: corner too quickly and it will lean heavily on its springs. The steering could do with a little more weight, too, but it does mean you can easily thread the Captiva through town, while low-speed manoeuvring is easy. The drawback is a total lack of feedback through the wheel, which can be a little unsettling at high speed. The 2.0-litre VCDi diesel won’t set pulses racing, but its 148bhp and 320Nm of torque make for a reasonable 0-62mph time of 11.3 seconds.

Teamed with a manual gearbox it’s quite efficient, too, returning 38.2mpg and emitting 197g/km of CO2. Opt for the automatic transmission, though, and these figures fall to 32.8mpg and 225g/km respectively.

The price for this luxurious Captiva is £28,145. While that may seem expensive for a Chevy, this is one of the best-equipped and most practical cars in this sector. It’s just a shame the driving experience doesn’t follow suit.

Rival: Hyundai Santa Fe With seven seats and plenty of kit, the Santa Fe is great value. The top-spec car costs around £2,000 less than the Chevy, but misses out on key gear such as sat-nav and a reversing camera.