The Chevrolet Captiva gets a make-over with the refined, if slightly expensive, Captiva LT 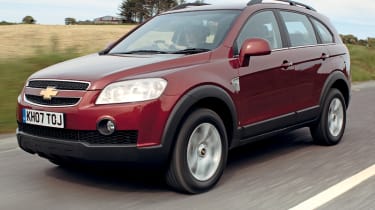 After a few false starts, the launch of Chevrolet's all-new Captiva is far from disappointing. A smooth, quiet diesel engine, along with bags of room and refined styling, make this a credible contender in the SUV market. The ride is bouncy and the steering vague, but the Chevrolet looks the part - even though it only pays lip service to its off-road ability. Yet that £22,320 price tag is a bit on the steep side.

Surprising as it sounds, Chevrolet is about to ditch its all-American, mud-plugging, gas-guzzling image by introducing this all-new soft-roader, badged the Captiva.

The marque is best known for its full-sized 4x4s sold in the US. But it's promising this latest SUV, which goes on sale in the UK later this month, will be the first in a fresh range of smaller models it plans to launch over the next five years.

What's more, to show they mean business, bosses are offering the new seven-seater with the most advanced diesel engine the company has ever built. And first impressions are very good. The Captiva's chunky, wedge shape certainly looks the part, while the sloping roofline, distinctive headlamps and chrome detailing provide it with an upmarket feel.

Add in the flexible and spacious interior of our LT test model, and the car should appeal to style-conscious families who need the capacity of a people carrier for the school run, but want a sporty and rugged-looking machine for the weekends.

Inside, the cabin is as smart as it is roomy, and the instruments are all clearly laid out. We liked the dark upholstery on the version we drove, too. Yet while the Chevrolet has a good, elevated driving position, the seats simply don't provide enough comfort - we found the lack of side support and the unusually high lumbar soon took their toll.

Visibility is excellent, which makes manoeuvring the car's bulky frame a breeze. But it's still worth specifying the optional parking sensors, as the raised rear can mean it's difficult to judge reversing distances.

Further back, you can create extra space in the boot by folding the standard 60/40-split rear bench flat - this sees luggage capacity increase from 465 litres to 930 litres. The trouble is, until you get used to the system, it's a fiddly and back-breaking pro-cess. Nevertheless, loading items into the boot couldn't be much easier, because owners can choose to open only the window hatch, rather than the whole tailgate.

On the road, we were impressed by the 2.0-litre diesel engine, which has been developed at Chevrolet's plant in South Korea. It won't exactly set your pulse racing, but with power and torque outputs of 148bhp and 320Nm respectively, it had more than enough grunt to nip round town and comfortably tackle motorways.

The unit is mated to an automatic gearbox - which comes with a manual shift option - so progress through the ratios is steady, relatively smooth and quiet. Top brass have told us we won't see this transmission on the options list for the Captiva's sister car, the Vauxhall Antara. However, other models in the Chevrolet line-up are likely to benefit.

The biggest letdown on the new SUV, though, is the handling. While the ride is comfortable, it's not particularly well controlled, so over uneven surfaces, the soft set-up leaves occupants bumping around the cabin. The steering is vague, too, so you won't push the car into bends with relish.

To go with its rugged styling, our model featured a clever hill descent system plus an on-demand All Wheel Drive set-up. Over rough terrain, it's no more capable than any of its soft-roader rivals, but then most Captivas are unlikely to venture far off the tarmac. With this in mind, Chevy offers an entry-level front-wheel-drive 2.4-litre petrol version. A strict five-seater, this car features a manual transmission and costs £16,995. That's £5,000 less than our seven-seat diesel model.

The Captiva is an impressive first attempt at a smaller SUV from Chevrolet. It's not cheap and isn't without its flaws, but its combination of a strong diesel engine in a spacious, practical package is sure to appeal.