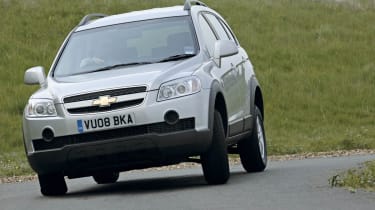 If rugged SUV styling and a low price are your priorities on a new car, then the Captiva is well worth considering. The off-roader looks good, comes packed with kit as standard and features an excellent oil-burning powerplant that offers a fine mix of pace and economy. Sadly, the cheap cabin materials and poor body control count against the Chevy. But if you can live with these, it offers a blend of space, comfort and value that few rivals can match.

While Saab prepares to take on the prestige brands with its luxurious new 9-4X SUV, sister company Chevrolet is pitching its latest Captiva at the value-for-money end of the off-roader market.

The firm’s compact SUV debutant made its UK bow less than a year ago, but this is the first time the entry-level LS version has been offered with a diesel engine – the torquey 148bhp 2.0-litre powerplant which has already been seen in the pricier LT.

For buyers on a budget, the newcomer certainly seems attractive on paper. Priced at £18,295, it undercuts Hyundai’s oil-burning Sante Fe base model by more than £3,500.

And in the metal, initial impressions are equally positive. Despite the brand’s US heritage, the Captiva has been designed with Europe in mind.

Sharing much of its bodywork with its near-identical twin, the Vauxhall Antara, the Chevy benefits from tall, chunky styling. Neat touches include tough-looking plastic cladding for the wheelarches and sills, together with metal-finish roof rails.

Sadly, the cabin is less impressive. There’s lots of space, but the quality of materials, particularly the hard and scratchy plastics, isn’t up to class standards. The cheap-feeling dashboard cubby is especially unpleasant.

There’s plenty of kit, though. Air-conditioning, electric windows and an MP3 connection are all fitted as standard. Hit a button on the driver’s door armrest and the tailgate glass pops open, allowing you to drop items into the luggage bay without lifting the bootlid. However, if you want seven seats you will need to spend another £2,845 on the range-topping LT.

On the move, the Captiva proves a mixed bag. The smooth and punchy 2.0-litre turbodiesel it shares with the Antara gives decent urge and returns 38.7mpg economy. Motorway refinement and comfort impress as well.

Turn into a corner, though, and the Chevrolet is much less accomplished. Lifeless steering, excessive body roll and an occasionally crashy ride really let it down. Don’t expect the car to redeem itself off-road, either.

Despite its rugged looks, the Captiva is two-wheel drive, making it a tarmac-only SUV. All-wheel traction is available only further up the range.

Rival: Nissan X-Trail The cheapest diesel version of the X-Trail costs £2,100 more than the Captiva, at £20,395. But for that you get excellent road manners, four-wheel drive and a cabin that’s well thought-out and solidly put together.