The Captiva - Chevrolet's first 4x4 - has finally hit Europe and Auto Express was first to get behind the wheel! 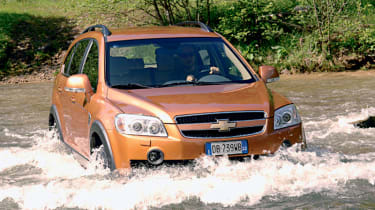 The Captiva is set to become the most capable model in the entire Chevrolet line-up. With smart looks and the option of either two or four-wheel drive, it also offers buyers plenty of space for the money. An optional third row of seats boosts practicality and won’t be available on its pricier Vauxhall Antara sibling, although the frugal diesel engine is the most sensible buy.

Chevrolet’s first 4x4 has finally hit Europe, and Auto Express was first to get behind the wheel! We were Captiva-ted by the Daewoo-badged version, and now we’ve tried the Chevy on Continental roads to see how it measures up.

We grabbed the keys to the sole petrol offering in the range – a 140bhp 2.4-litre model. Visually, the Captiva ticks all the right boxes, with a tall and chunky appearance. Roof rails and plastic side mouldings also give it real off-road credibility, while the electronically controlled four-wheel drive of our test car can put as much as 50 per cent of the available power to the rear axle.

For the school run, the interior even has the option of a third row of chairs, making the Chevy a full seven-seater. Although space is tight in the back section, the chairs fold flat when not in use to improve load space.

Stowage for five-passenger cars is 465 litres, rising to 930 litres when you lower the second row. However, if you use all seven seats, room for luggage is very restricted. Whatever layout you choose, there is the benefit of opening rear glass, so you needn’t raise the entire tailgate to gain access to the boot.

Up front, the neatly designed dashboard and centre console look good. And although hard cabin plastics are the order of the day, solid build quality and generous equipment compensate. Unfortunately, the heating panel and stereo are positioned far too low, while a needless storage cubby occupies the more desirable location higher up.

On the road, the Captiva is more MPV than SUV. Light and accurate controls enable relaxed long-distance cruising, although you have to work the raucous 2.4-litre engine hard to make fast progress – the 0-60mph sprint takes 11.5 seconds. At motorway speeds, wind noise from the big door mirrors is a distraction.

Our main disappointments were the notchy manual five-speed transmission and the firm ride on the admittedly rutted roads of our test route. However, the suspension set-up does give the Captiva decent body control for such a tall vehicle, and roll is relatively well contained, too.

We will have to wait until we drive the Chevrolet on British roads before delivering a final verdict, but the initial signs are encouraging. Prices have still to be announced, yet when the Captiva arrives next February, expect LS-spec front-wheel-drive five-seaters to cost little more than £16,000. Standard-fit equipment will include air-conditioning, electric and heated door mirrors, remote central locking and an MP3-compatible stereo.

Go for an LT model such as the one driven here, and you’ll get self-levelling suspension, ESP, 17-inch alloy wheels and half-leather trim, too. Ultimately, though, big petrol-engined SUVs are never the most sensible choice, and despite its reasonable economy, the Captiva does nothing to change that.

The oil-burner will undoubtedly be the pick of the line-up when it arrives in showrooms in the UK, and if the mid-range seven-seater is priced at £18,500 as predicted, it will give its rivals some serious competition.