The new Captiva's good-looking, has a wide model range, plus a great diesel engine 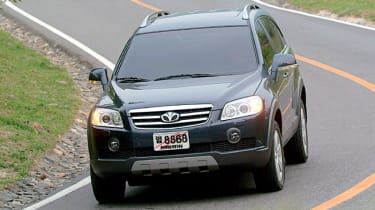 The new Captiva is such an impressive machine that it's sure to upset the SUV hierarchy when it arrives in Britain. It's good-looking, has a wide model range - with both front and four-wheel-drive variants - plus a great diesel engine. It's a pity buyers here will have to wait until 2007 to take delivery, but the Captiva looks set to become the most accomplished model in Chevrolet's UK range.

It's another exclusive for Auto Express! The new Captiva is not only Chevrolet's first UK 4x4, but also the maker's most important arrival of the decade. And we've already been behind the wheel to see what the newcomer has to offer.

Now on sale in its native Korean market, the Captiva is based on General Motors' Theta platform, which also forms the basis for the new Vauxhall Antara SUV. When it arrives in dealers here next year, however, the Daewoo badges will have been replaced with those of Chevrolet. But will the SUV have the abilities to woo UK buyers?

Taking notes from the class leaders, Chevy's designers have got the Captiva's styling spot-on. It's not too outlandish, but looks sleek and modern from every angle, while silver-coloured plastic trim adds to the chunky, off-road appeal. In the past, Korean-built cabins have failed to live up to the standards set by European rivals. Yet the latest Hyundai Santa Fe has already shown how far the nation's car makers have come. Here, the interior layout is attract-ive and the controls are ergonomically placed. It's solidly put together, too.

Buyers can choose between five and seven-seat versions, both offering great versatility. In the former, there's a useful storage cubby beneath the floor, into which the additional chairs fold in the seven-seater. An opening rear window gives easy access to the load space.

Matching the smart interior design, engineers have been equally clever with the Captiva's powertrains. The big seller will be a new 2.0-litre direct-injection diesel unit, which benefits from the latest particulate filter and a variable geometry turbocharger. With 148bhp and 320Nm of torque, its performance is impressive. The oil-burner provides plenty of thrust from low down in the rev range and never feels strained when hauling the 1,730kg SUV around.

UK buyers will have the option of a 2.4-litre petrol engine, although the most powerful variant - a 3.2-litre V6 - won't be imported here.

Yet regardless of which unit is under the bonnet, Chevrolet engineers know that getting the handling right is crucial. While the suspension of UK-spec cars will be adjusted to suit our roads, the current set-up is already impressive.

The Captiva's body remains stable when cornering, while the springs and dampers absorb surface imperfections with ease. An advanced anti-rollover programme combines traction control and braking technology to boost the car's safety credentials.

Two and four-wheel-drive Captivas will be offered. Opt for electronically controlled 4x4, and the model will be able to tackle moderate off-roading, but it is more at home on tarmac.

While the new SUV will go on sale across Europe next month, due to a delay in the engineering of right-hand-drive variants, it won't appear in UK showrooms until early next year. Still, while prices have yet to be announced, the line-up is expected to cost from £16,000 to £24,000.

On this evidence, it looks as though established class leaders from the likes of Honda and Toyota have yet another worthy contender on their tail.