The Mitsubishi Outlander PHEV hybrid might take all the column inches but how does the standard diesel Outlander shape up? 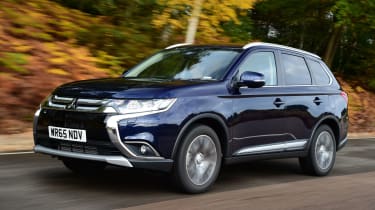 On paper, the facelifted Mitsubishi Outlander diesel struggles to match its PHEV brother’s impressive fuel economy and low overall running costs, but the diesel makes more sense. It’s good enough to drive and the tweaks to the exterior are welcome, but if you want a diesel SUV with seven seats, the Kia Sorento and Hyundai Santa Fe are far more accomplished all-rounders, despite being marginally more expensive to buy.

When the current Mitsubishi Outlander launched in 2013, Mitsubishi made a big thing about how the PHEV plug-in cost the same as the equivalent diesel spec-for-spec.

On paper, it’s off to a bad start. The diesel returns 53.3mpg economy (versus the updated PHEV’s 156mpg figure). To add insult to injury, the plug-in car is also exempt from London’s Congestion Charge and Vehicle Excise Duty (VED).

• Best SUVs on the market now 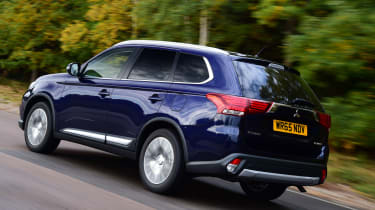 Running costs aside, the Outlander is easy to live with. It’s simple to manoeuvre at low speeds and there’s a well judged, supple ride. Plus, as the diesel is 245kg lighter than the battery-laden PHEV, it rides better.

On the motorway, the car remains refined, with only a little wind noise, but the suspension struggles on undulating roads and has a tendency to wallow at times. The steering doesn’t offer much feedback, either, yet it’s accurate and nicely weighted.

The engine is quiet, although it’s not the strongest in the class and quickly runs out of puff. With 148bhp, the 2.2-litre diesel delivers 0-62mph in 10.2 seconds, yet the instant torque of the PHEV’s electric motor means the diesel doesn’t feel as quick. Still, there’s enough grunt through the gears, and the six-speed manual is slick and easy to use. 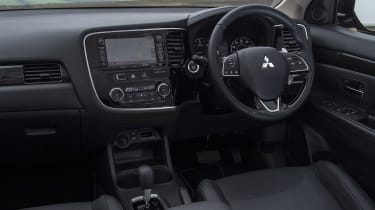 Our mid-spec GX3 test car benefited from the same aesthetic changes as the refreshed hybrid. All models are four-wheel drive, and get LED daytime running lights on the outside and a USB socket inside, while this GX3 adds smart 18-inch alloy wheels, keyless go, automatic lights and wipers, Bluetooth and leather.

Seven seats are standard – that’s two more than in the PHEV due to its boot-mounted electric motor – although there’s not as much room in the third row as you’ll find in rivals like the Kia Sorento.