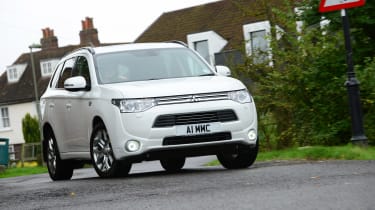 If you want space, rugged SUV styling and low company car tax bills, then the Outlander PHEV makes a certain amount of sense. However the cabin feels low-rent and the driving experience isn't up to the standards of the best 4x4s, plus the petrol engine can be thirsty.

The Mitsubishi Outlander PHEV became the world’s first plug-in hybrid SUV when it went on sale early in 2014. With a high-tech powertrain and headline economy figures of 148mpg and 44g/km of CO2, it’s made a big impact on the UK car market, particularly among company car drivers.

Thanks to the £5,000 Government plug-in car grant, the Outlander PHEV prices range from just over £28,000 for an Outlander GX3h to £40,000 for the top-spec GX5hs. With the GX4h and GX4hs in the middle of the line-up, overall prices for the PHEV are largely the same as for the equivalent diesel Outlanders, giving buyers an interesting decision.

Further efficiency and economy benefits from owning an Outlander PHEV include exemption from road tax and the London Congestion Charge. Although, electric cars have previously enjoyed a zero per cent Benefit in Kind (BIK) company car tax rate, as of April 2015 rates are going up. Owners of cars such as the Outlander PHEV will still only be liable for the five per cent tax bracket. 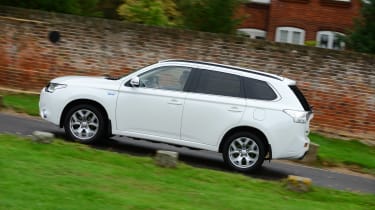 On the road, it’s no surprise that the Mitsubishi Outlander PHEV is much quieter than the regular diesel Outlander, no matter which mode the car is operating in. Be it petrol engine and electric motors working in sync, or as a pure EV, the PHEV is extremely hushed.

The impressive refinement of this Mitsubishi hybrid is due to enhanced sound deadening throughout the car, but also thanks to the hybrid powertrain, which favours running in all-electric mode. The petrol engine is noticeable when you start the car up, but it’s never overly loud or intrusive.

• Company car tax guide: everything you need to know

In terms of performance, the Outlander PHEV puts out a combined 204bhp from two electric motors – one on each axle for four-wheel drive– as well as a 2.0-litre petrol engine. Normally, the PHEV runs in pure electric mode with 161bhp.

When the battery charge drops below a certain level, the petrol engine kicks in to generate electricity. Mitsubishi calls this Series mode, which will work up to 70mph. At higher speeds, a clutch engages to connect the engine directly to the front wheels, providing drive while recharging the battery at the same time, hence the 43bhp boost in maximum power. 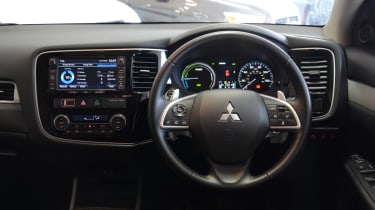 Power delivery is smooth and the Outlander will go on to reach a top speed of 108mph, but it never feels that brisk. There’s also a mode that fires up the engine to charge the battery for later use, while shift paddles on the steering wheel increase the force of the regenerative braking, charging the battery faster.

With a full battery and fuel tank, the Outlander PHEV can manage a claimed 560 miles without stopping. Charging takes about five hours from a domestic socket, or an 80 per cent charge can be achieved in 30 minutes from a fast charger. Of course, the fuel tank can be topped up for instant mobility, too.

• Best SUVs on the market now

While the Outlander provides an all-electric range that most traditional hybrids can’t match, it’s also theoretically a better-handling car. Mitsubishi has fitted a torque-vectoring system – dubbed Super All Wheel Control (S-AWC) – that shuffles power to the wheels that require it the most. 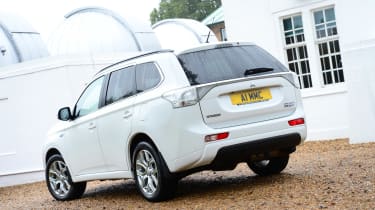 The ride height has been dropped by 30mm to the regular Outlander, and the batteries are positioned between the wheels, so the PHEV has a lower centre of gravity. This means it changes direction well enough, but it’s still no sports car and the ride can be jarring. This is especially noticeable through the corners where the suspension can lose composure over mid-corner bumps. The steering is light and direct, but it has noticeable kickback.

Inside, the Outlander is a practical choice and is packed with kit. It has good visibility, light controls and plenty of room for five passengers, plus a decent-sized 436-litre boot, but the infotainment system can be difficult to get your head around and quality isn’t as impressive as other cars at this price. The interior is funcitonal, but a little basic. The combination of gloss black trim and silver inserts help lift the dash, but some materials feel low-rent.