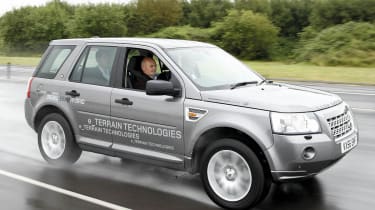 By introducing its e-Terrain technology, Land Rover has worked hard to clean up the image of its cars – and it might just be enough to breathe fresh life into the 4x4 sector. While the brand is unlikely ever to make the cleanest cars on the market, the innovations it’s introduced here are impressive, not least because they don’t compromise the standard car. If Land Rover makes good on its promise to introduce the CO2-reducing technology soon, the 4x4 experience could well become guilt-free.

The future of green motoring is here – and it’s a 4x4! This Land Rover Freelander is a super-clean, economical diesel-electric hybrid, capable of returning 50mpg and producing CO2 emissions lower than those of many family cars.

Badged the e-Terrain, it’s a concept from the famous off-road firm which seeks to challenge the perception of 4x4s. From the outside, it looks like a regular Freelander – all that distinguishes this £1million prototype from a regular model are the ‘e-Terrain technologies’ stickers which are displayed on the sides.

But that’s the beauty of the new set-up – it’s all hidden, so driver and passengers won’t notice any difference, nor have to accept any compromises on space, performance or comfort.

The changes will be more apparent at the pumps, due to the e-Terrain’s distinctly non-4x4 fuel consumption of 50mpg.

Power comes from a 2.2-litre diesel engine combined with a 288-volt electric motor. The clever bit is a parallel hybrid unit that works in conjunction with Land Rover’s famed all-terrain four-wheel-drive system.

When required, the electric motor can be used to boost the diesel engine, providing extra traction on tricky terrain or a surge of acceleration on the move – or it can power the car on its own at speeds of up to 20mph. The ‘Integrated Starter-Generator’ (ISG) seamlessly restarts the engine when the vehicle exceeds that speed.

So in a traffic jam, for instance, the e-Terrain can creep along on electric power, generating no emissions and drastically reducing the overall CO2 output. Regenerative braking helps to recharge the lightweight lithium-ion battery powering the electric motor.

There’s also a stop-start electronic system which cuts off the diesel unit when the car is stuck in traffic, restarting it when the flow picks up again. Again, this reduces emissions and improves fuel consumption.

From the driver’s seat, the big change is the silence when you start up using only the electric motor. Even after the diesel kicks in, this Freelander is remarkably refined, especially for a prototype.

On the move, the Land Rover feels very much like a normal model, with plenty of go through the gears. Changes are occasionally jerky, although the firm’s engineers promise that the production model won’t suffer the same issue.

At high speeds, the combination of the diesel engine and electric motor performs strongly – especially as all the latter unit’s torque is available instantly.

Newly developed, lightweight materials are used throughout and, in trials, the diesel hybrid has reduced CO2 emissions by more than 20 per cent – and by up to 30 per cent in real-life urban conditions.

What’s more, Land Rover is developing this hybrid technology for use in all its models, including the Range Rover, helping to drive down emissions across the range, boosting the brand’s image.

Although we drove a Freelander prototype, Land Rover plans to launch its hybrid technology in the futuristic LRX mini-SUV first. The model is set to arrive in showrooms in 2010.