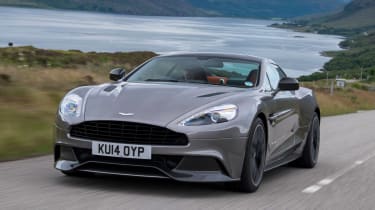 For an Aston Martin to succeed it has to look good, and the Vanquish sticks closely to the formula used by its predecessors. The classic low-slung coupe proportions are hard to fault, while a smaller front grille, carbon-fibre splitter and LED running lights freshen up the front end. Prominent side strakes run down the side of the car, while a gorgeous one-piece carbon-fibre spoiler is part sculpture, part aerodynamic aid. 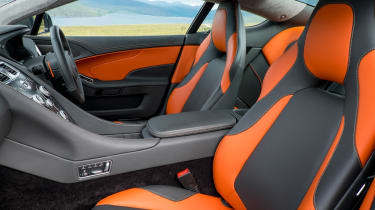 On the inside, the cabin has a typically plush, hand-trimmed finish and an all-new centre console design. Touch-sensitive buttons vibrate when pressed, while all infotainment functions, including sat-nav and stereo controls, are integrated into the pop-up central screen.

Unusually the steering wheel is squared-off on either side but it works well and the cabin is palatial as you would expect from a car that costs almost £200,000. When the Vanquish was upgraded at the end of 2014 Aston introduced a few new interior trim colours and options, and if you order a car with the standard ‘hourglass’ quilting on the Bridge of Weir ­­­leather upholstery you’ll be sitting on an incredible million stitches.

The Vanquish's infotainment system is now looking very date next to rivals - especially compared to the DB11. The setup is controlled via a joystick on the console and with a 6.5-inch pop-up LCD display at the top of the fascia. Sat-nav and routing is provided by Garmin, and Bluetooth audio and phone streaming are standard. The reversing camera is an optional extra, although we expect most owners to consider it an essential.

The Vanquish’s audio system is especially noteworthy, as the car features a Bang and Olufsen set-up with 1,000 Watts of music and 13 speakers dotted around the cabin. Apparently 400 hours of sound tuning were required to perfect the tone, which adjusts dynamically in response to ambient cabin noise.