The 542bhp Range Rover Sport SVR is one of the fastest SUVs in the world. See it up close in our exclusive video 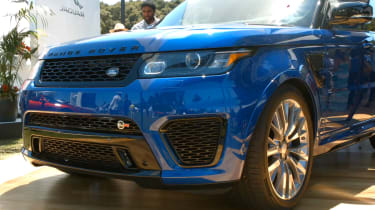 Land Rover has unveiled its Range Rover Sport SVR at the The Quail car show, part of Monterey Car Week in California. We were on hand to capture the high performance SUV on video.

At the heart of the SVR is a tuned version of the 5.0-litre supercharged V8 from the standard Range Rover Sport, which drives all four wheels via an eight-speed automatic gearbox

. Power now stands at 542bhp and 680Nm of torque, an increase of 40bhp and 56Nm respectively. The improvements mean the Range Rover Sport SVR trumps the 520bhp Porsche Cayenne Turbo for headline power outputs, but can only match the Porsche when it comes to the 0-60mph sprint - both cars completing it in a scorching 4.5 seconds. The Porsche pulls ahead at higher speeds though, topping out at 173mph, while the SVR can only manage an electronically-limited 162mph.

In order to extract maximum performance and drama, Land Rover has equipped the SVR with a two-stage active exhaust featuring electronically controlled valves, with quad pipes at the back. It provides a throatier soundtrack and a boost in performance at higher revs, while optional 22-inch alloy wheels wrapped in sticky Continental SportContact performance tyres offer improved traction. As standard, Land Rover will fit a 21-inch alloy with all-season rubber.

The visual tweaks are plain to see and not just cosmetic either: The deeper front bumper and larger air intakes are there to improve cooling, while round the back, there’s a more prominent rear bumper and new diffuser, both designed to boost aerodynamic efficiency. Bespoke sport seats differentiate the SVR from the standard Range Rover Sport inside, too.

The Range Rover Sport SVR will be sold and produced alongside standard Land Rover models, with customers able to place orders from October. Priced at £93,450 – £11,875 more than the regular Range Rover Sport – first deliveries are expected early 2015.