Inside the cabin is where the new Panamera really excels, with a beautifully crafted design and top-class materials 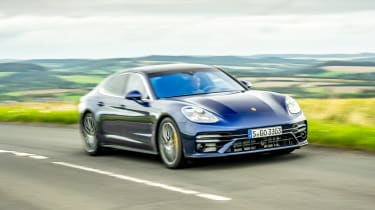 Porsche’s designers tidied up the high transmission tunnel for this second-generation car, and found a way to reduce the button count, introducing a slick glass panel with touch-sensitive controls.

The digital theme is carried over for the instruments, too. Although the car retains Porsche’s trademark central analogue rev counter, either side of this is a seven-inch screen. The left-hand side features the speedometer, as well as various customisable options such as traffic sign recognition, speed limit indication and cruise control information. On-board computer details, such as the fuel gauge, range and economy, feature on the screen to the right of the rev counter, while there’s also the option to view the satellite navigation map.

The GTS model is set apart from the rest of the range with the addition of Alcantara trim for the steering wheel and seats, along with a handful of “GTS” badges for the rev-counter, tread plates and headrests. Opting for the Sport Chrono package adds a stopwatch to the top of the dash.

After a facelift in 2020, all Panamera versions now include the Sport Design front end as standard, with larger intake grilles, side cooling and a single-bar front light module. At the rear, there are new LED tail-lights, plus darkened clusters for the GTS variants. Three new alloy wheel designs have also been added to the range. 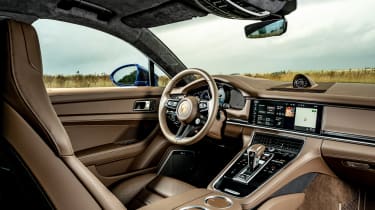 The Panamera's multimedia set-up is the most sophisticated system ever in a Porsche. You can turn the car into a Wi-Fi hotspot, connect to apps, get info on fuel prices and link your Apple phone or watch via CarPlay. However, it’s the slick way in which it all works so seamlessly that’s impressive.

Above the centre console there’s a 12.3-inch touchscreen showcasing the next evolution of Porsche Communication Management. Everything is controllable from this display, with even the central air vents opened and closed by sliding your finger up and down the screen. Apple CarPlay is included, while features such as Google Earth, Street View, in-car internet and info on fuel prices are all offered as part of Porsche’s Connect Plus system.