The Panamera is no eco car, but efficiency improvements mean it returns respectable fuel economy, given the performance on offer 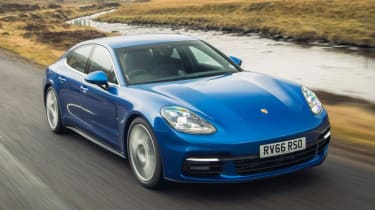 As part of the Panamera’s engine line-up, all V8 variants get cylinder deactivation technology that will shut down some of the unit’s injectors on the move when maximum power isn’t needed, helping save fuel.

Unsurprisingly, the 4 E-Hybrid is the most efficient Panamera on sale, returning 78.5-85.6mpg under WLTP testing and emitting only 62g/km of CO2, according to Porsche’s claims.

Move up through the increasingly powerful petrol models and you see obvious reductions in efficiency and higher emissions. The Panamera 4 manages 25-26.9mpg, with a CO2 output of 194g/km, while the GTS delivers 22.2-23.5mpg and a significant jump to 235g/km of CO2. The range-topping Turbo is only slightly less efficient at 22.2-23.0mpg, with emissions at 238g/km. As ever, you may not match any of these numbers if you choose to exploit the Panamera's full performance. 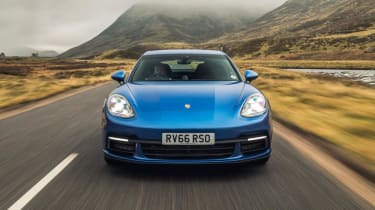 Premium cars like Porsches generally aren’t cheap to insure, and the new Panamera is no different. Given its predecessor ranged from group 46 to group 50, expect high premiums despite some sophisticated safety technology.

Our experts predict that the Panamera will retain between 48 and 53 percent depending on model, which is strong resistance to depreciation for a car priced around or above the £100,000 mark.

Porsche is known for its reliability, too, so despite the tech-laden interior, we’d expect everything to be working just as well as it did when new, with 100,000 miles on the clock.