VW has created the Tristar extended-cab pick up, shown at the Paris Motor Show 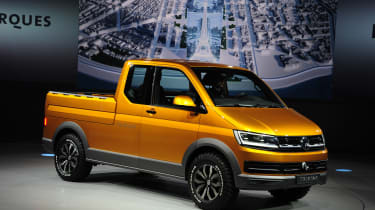 Volkswagen Commercial Vehicles has created the Tristar concept for this year's IAA commercial vehicle show in Hanover, but it has also appeared in Paris today. VW bills the Transporter-based Tristar as "a combination of all the great features of the current T model series" with impressive off-road capability and flexible storage solutions. It previews the various goods and passenger solutions that will be on offer on the next generation Transporter - the T6.

The Tristar is an extended-cab short wheelbase pick-up based on the Transporter van with four-wheel drive and 30mm additional ground clearance over the standard T series panel van.

The styling takes cues from the rest of the VW range, with sharp lines and LED headlights, while the interior features a 20-inch tablet table, video conferencing system and front seats which turn and slide so meetings can be held. There's even a built-in espresso machine!

At the business end, the load area is split into two levels. There's the flat load bay, as well as a dust-proof and watertight draw situated underneath.

The Tristar is driven by a 2.0-litre TDI diesel engine, putting out 201bhp and 450Nm of torque. There's a 7-speed DSG gearbox, permanent 4Motion four-wheel drive, and the pick-up is capable of hitting 115mph.

The concept makes its debut on the eve of the 30th anniversary of the first 4x4 syncro concept vehicle, and Dr. Eckhard Scholz, Chairman of the Board of VW Commercial Vehicles, notes that the Tristar "highlights the company's all-wheel drive expertise and and demonstrates its future viability", suggesting a model similar in concept to the Tristar could be on the cards some time in the future.

More details on the new Transporter can be expected later in the year.

Welcome to our Paris Motor Show hub page. Scroll down for all our Paris content...
VW to pay customer £25,000 following new Dieselgate ruling