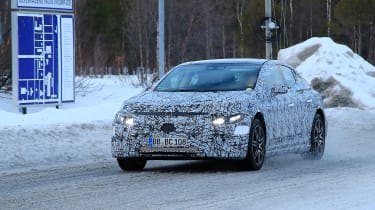 What looks to be another new all-electric Mercedes has been spied in development, believed to be a smaller sibling for the upcoming EQS luxury limousine.

Expected to take on the EQE nameplate, it will be an electric alternative to the Mercedes E-Class, sizing up as a full-blown executive car and battery-powered option alongside traditional stalwarts like the BMW 5 Series and Audi A6.

As such, it’ll be more of a rival for the Tesla Model S than the EQS, due to its shorter wheelbase and expected smaller price tag when it goes on sale in 2022.

While the EQS sizes up at 5.2-metres long, the EQE will likely duck under the five-metre barrier, with a wheelbase and body length aligned closer to Tesla’s largest saloon, but not quite matching it. It’s expected to be slightly shorter than the newly facelifted E-Class, while delivering a comparable amount of interior space. 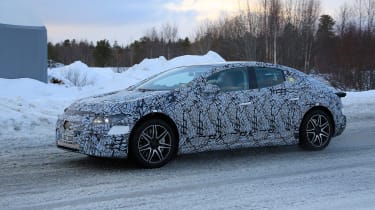 Comparing these spy shots with official teaser images Mercedes has issued of the EQS reveals that the two models will bear a striking resemblance, with similar surfacing, a front end using the same language established by the EQC, a swooping beltline and a large glasshouse. The only visible difference comes at the back, where the EQE appears to have a much stubbier rear end with a smaller boot and shorter rear overhang. The wheelbase is visibly shorter too.

The EQE is set to share the same platform as the EQS - a brand new architecture Mercedes has developed for its next-generation electric cars. It’ll differ compared to the combustion-engined adapted platforms used by the EQC and upcoming EQA and EQB SUVs by being engineered for electric vehicles first and foremost, and goes by the name of Modular Electric Architecture (MEA).

It’s a flat aluminium ‘skateboard’ style chassis that can be adjusted in length, to accommodate a number of different sized vehicles with different sized battery packs. It’s a key element to Mercedes’ target of delivering ten electric vehicles across the Mercedes and Smart brands by 2022. No technical specifications have been revealed, but in the concept EQS, Mercedes envisaged a vehicle capable of over 435 miles.

The shorter wheelbase of the EQE means that realistically, Mercedes will target the 379 mile WLTP range of the Tesla Model S Long Range for the range-topping version of the EQE, when it hits roads in 2022.

Are you exciting to see Mercedes expand its electric car range? Let us know your thoughts in the comments below... 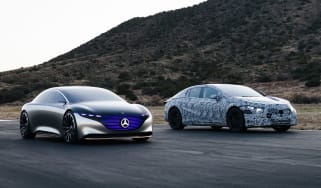 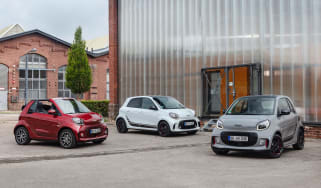