The Land Cruiser won't be cheap to run, but it's reliable and is predicted to hold its value well 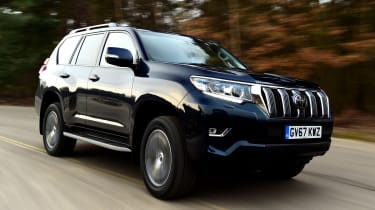 Big cars come with big running costs, and the Toyota Land Cruiser is no exception. The downsized diesel is a big improvement on the 3.0-litre it replaced, although the latest WLTP tests don't show it in a very good light. Maximum economy is quoted at 32.6mpg for the manual and 30.2mpg for the auto. The truth is you’re unlikely to match the official figures – 25mpg seems more realistic – but you'll be closer to the claimed figures than before. There’s no escaping CO2 emissions ranging from 190-201g/km, though. They mean hefty road tax bills for company users.

A large off-roader is going to be expensive to run no matter what badge it’s wearing, and the Land Cruiser has the added advantage of being cheaper to drive out of the showroom than those from many of the premium brands. But it's the lower spec Utility and Active models that are less than £40,000, so the rest of the range will see a premium of more than £400 added to their annual road tax bills for the first five years it's paid. 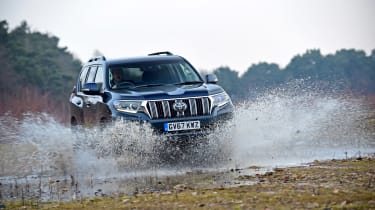 THe Land Cruiser comes well equipped in Icon and Invincible trims, so you won’t feel as though you’re missing out on luxury goodies. The top-of-the-range Invincible model includes keyless go and a 360-degree camera, as well as adaptive suspension, crawl control and cross-traffic alert. There’s also a DVD player for the kids, a terrain monitoring set-up and a 17-speaker hard-drive music system. Even if you go for the Active, you get cruise control, an infotainment touchscreen and a rear view camera, while the Utility model will appeal to buyers wanting a no-nonsense 4x4 that goes back to basics.

Insurance premiums for the Land Cruiser won’t exactly be cheap. Although there’s only one engine choice, the big 4x4 is ranked from insurance groups 35 to 41, depending on trim level.

Thanks to its reputation for bomb-proof reliability, the Toyota holds on to its price well: our experts predict a strong residual value of 52 per cent over a theoretical three-year/30,000-mile ownership cycle. Bear in mind that the five-door, seven-seater Land Cruiser will retain much more of its value than the three-door, five-seat version. The latter is much less useful as a family car, and used demand reflects this. Either way, the second-hand market will be less enamoured of a low-spec Land Cruiser, while models with an automatic transmission will be valued more highly, too. These are all things to remember in the showroom if you want to maximise your returns come resale time.