We get behind the wheel of the new 296bhp Cupra Ateca SUV in the UK for the first time... 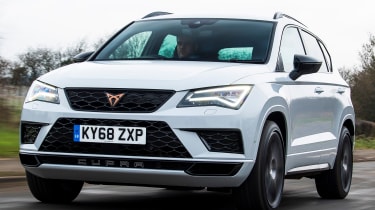 The Cupra Ateca sits, for the time being, in a class of one. But that isn’t reason enough to buy one. Its SEAT donor car has always been among the better small SUVs to drive, and the extra grunt gives it a welcome boost in straight-line speed. Yet the current crop of talented hot hatchbacks offer more performance per pound and, therefore, better value for money.

Whatever you do, don’t call it a SEAT. This is the new Cupra Ateca – and the first model to bear the sporty sub-brand’s tribal logo. However hard you look there’s not a SEAT badge in sight.

The fact remains, however, that this is fundamentally just a repackaged version of the standard Ateca SUV, albeit with a few fruity add-ons and the engine from a Volkswagen Golf R. As such, it’s powered by the same 2.0-litre four-cylinder turbocharged petrol unit with 296bhp and 400Nm of torque – and will sprint from 0-62mph in 5.2 seconds.

Sitting beneath cars like the Audi SQ5 and Porsche Macan – and above less powerful models like MINI’s Countryman JCW – the Cupra sits in a class of one. We’ve already driven the car in Spain, but this is our first chance to try the niche-busting SUV in the UK. 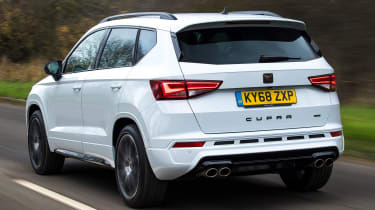 Whether or not you approve of Cupra’s decision to tart up the Ateca rather than start from scratch is entirely subjective. The SUV is a good starting point, however; SEAT’s interpretation is currently the finest-handling car in its class.

It comes as no surprise then, that the Cupra version drives really rather nicely for something so tall. Body control is impressive, and grip from the 4Drive all-wheel drive system is unbreakable on dry roads. The steering isn’t as satisfying, however and doesn’t feel any more communicative than the set-up you’ll find in its SEAT donor car. A Honda Civic Type R or Hyundai i30 N is more rewarding to drive on an undulating B-road.

But it was the powertrain that contributed our biggest complaint when we drove the flagship SEAT Ateca 2.0 TSI 190 earlier this year. Happily, however, with an extra 89bhp and 80Nm of torque this Cupra version is much more sprightly. In fact, it accelerates with the ferocity of its hot hatch rivals, leaping away from lights with similar levels of poise and purpose.

There are six drive modes to choose from: Comfort, Sport, Cupra, Individual, Snow and Off-road. Understandably, we left the last of those well alone – the standard 19-inch wheels and low profile rubber don’t look particularly adept at tackling much more than a dry field, let alone a rough or rutted track.

Dialling things round to Sport or Cupra mode causes the dampers to firm up and the engine mapping to alter. It’s already a quick car and doesn’t feel enormously faster in these harder settings, but by holding on to each gear, throttle response is improved.

Even the seven-speed DSG auto box, which in previous iterations has been known to feel slow or sluggish, seems up to the task. Its responses are fluid at low speed, yet kick decisively in the higher reaches of the rev range. It’s not got the character of the MINI JCW when it comes to its ability to pop, crackle and bang, but it’s acceptably sporting without shouting about its pretentions. 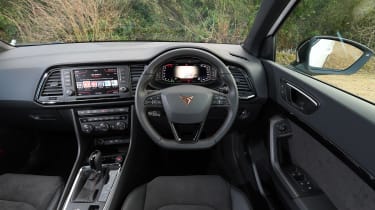 The ride is fine, but for an SUV there are times when you expect a little more pliancy. Refinement is acceptable, yet road noise is notable at 70mph – especially on harsher sections of concrete-covered motorway.

Still, the well-built interior insulates you from the worst of it, with loads of soft-touch plastics and comfortable Alcantara seats. It’s a bit of a shame the designers didn’t make it feel more unique inside, but the lack of sparkle should be rectified when bespoke Cupra models start to appear towards the end of 2019.

You won’t be left wanting for standard kit, however. Initial estimates suggested the tweaked Ateca would cost almost £40,000, but at less than £36k the hot SUV should be far more palatable for potential customers. Every car comes with digital dials, wireless phone charging, keyless entry and an eight-inch touchscreen, as well as those 19-inch wheels and standard-fit adaptive dampers.

The company has simplified the order process, too, by combining desirable extras within a selection of option packs. Our car came with the Comfort and Sound pack, for example, which adds a Beats stereo and the firm’s Advanced Driving Assistance Pack.