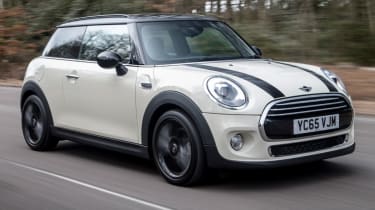 The new MINI has been running down the production line at BMW’s Plant Oxford since 2001. But, although its looks haven’t changed wildly since then, even with a new, second-generation model in 2006, there’s much more to this new, third generation MINI than meets the eye.

MINI is taking no chances with its eagerly anticipated newcomer. Not only is the car bigger and more refined than before, it features an all-new turbocharged engine line-up and even more upmarket interior.

The rival to the Fiat 500 and DS 3 is built on a new UKL front-wheel drive platform, which is also used for the BMW 2 Series Active Tourer. The MINI also features a range of new predominantly three-cylinder petrol and diesel engines that have been designed and engineered solely by BMW for the first time.

The MINI also benefits from even higher levels of technology than before, making it safer, better equipped and posher than it have ever been before. Yet with prices rises by 2.6 per cent, or around £400, the new MINI is also one of the most competitively priced that BMW has ever sold.

The latest MINI offers the quality and driver appeal of a baby BMW, but the design is becoming caricatured
New MINI Electric 2020 review