The Audi e-tron is a spacious and comfortable family SUV, but there’s no seven-seat option

By avoiding a seven-seat option, Audi has maximised the available space inside the e-tron’s cabin; despite the fact the Audi’s wheelbase is shorter than both the Jaguar I-Pace and Tesla Model X’s, there is plenty of room for adults to get comfortable.

Interior storage is good, too, with a big central cubby between the front seats. However, while this bin is a decent size, things can fall out and down the sides of the seats, which could prove frustrating over time.

The big boot offers space for loads of luggage, however. There’s even a 60-litre space under the bonnet (where the engine would usually sit) to store the charging cables and other bits and bobs.

At 4,986mm long, the Audi e-tron is 304mm longer than a Jaguar I-Pace, but 66mm shorter than a Tesla Model X. However, it is narrower than both, which should make it slightly easier to park on congested city streets. Especially, as every version gets a 360-degree parking camera. 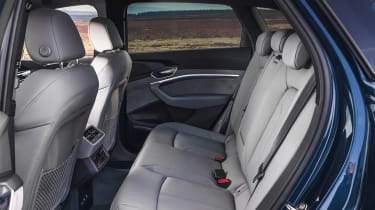 For comparison, those dimensions make it longer than an Audi Q5 (4,663mm) but shorter than a Q7 (5,052mm). The e-tron’s ride height is adjustable by up to 76mm, making it easy to get in and out of, while also allowing it some mild off-road ability.

The Audi e-tron is a spacious family SUV. By avoiding the temptation to fit an extra pair of seats in the boot, the engineers and designers have managed to maximise space in the second row to ensure even tall adults can get comfortable.

There’s loads of head and legroom in the rear, and you can fit three across the back for short journeys. Of course, up front there’s more than enough adjustment in the driver and passenger seats, with decent visibility all round. Just make sure you avoid those digital door mirrors!

The 605-litre boot is a really decent size, but a Tesla Model X is roomier with all its seats folded flat. Don’t let that put you off, however, as the e-tron’s maximum 1,755-litre capacity with the rear seats down is more than competitive against similarly sized and conventionally-powered rivals like the Q5 (1,550 litres) and Mercedes GLC (1,600 litres). It even beats the electric Jaguar I-Pace’s 1,443-litre load bay.

Perhaps surprisingly for an electric car, Audi quotes a maximum towing weight of 1,800kg. That can’t compete with the diesel Q5’s 2,500kg max, however, and nor does it trump the Tesla Model X’s 2,250kg figure. Jaguar doesn’t provide a towing limit for the I-Pace electric SUV.