The Karoq is available with full-LED lighting tech, and as we find out, the intelligent system enhances safety 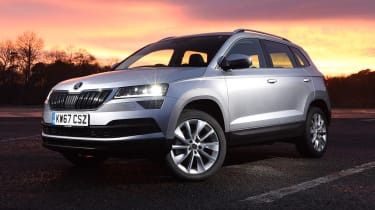 It’s a situation we’ve all been in at some point: you’re driving along an unlit country lane at night, testing your eyesight to the limit to spot obstacles ahead. Then, out of nowhere, a cyclist with no lights on their bike and no reflective gear appears, intending to turn into your lane to cross the road.

While the latest safety technology can often assist, whether or not you spot the obstacle in the first place is almost entirely down to your car’s headlights.

Traditionally, most vehicles had regular halogen bulbs, with high-voltage xenon lights fitted on higher-end models. In the past few years, though, LED tech has been filtering into the new car market. Usually the preserve of premium brands or a pricey option on more mainstream models, full-LED lights are fitted as standard on SE L-spec Skoda Karoqs and above. 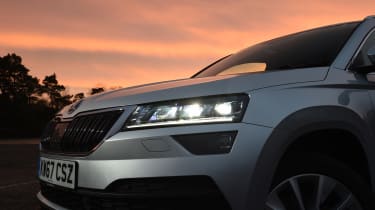 But what are the main benefits of LED lights? For starters, the light-emitting diodes are much smaller than traditional bulbs, meaning they can easily be arranged into intricate and attractive designs. The Karoq’s dipped and main beam alone are made up of 25 LEDs. Most importantly, the crisp white light they emit is brighter than halogen or even xenon systems, with a light intensity rating of 150 Lux compared with 100 Lux emitted by even the best halogen systems.

The colour temperature (measured at 5,500 Kelvin for the Karoq, which is in a similar range to the sun) is nearly twice as strong, too. LED lights can also activate more quickly than regular bulbs, hence why Karoqs fitted with LED headlights also feature LED tail-lamps, brake lights and indicators as standard.

Despite being brighter, LED lights use, on average, 30 watts less power than halogen units, and 20 watts less than a xenon bulb. That means there is less draw on the car’s battery, reducing fuel consumption.

The Karoq’s LED headlights are also intelligent. The Adaptive Front Light (AFS) system operates as soon as the lights are turned on, and can change the geometry of the light beam to suit different situations. For example, it projects a wider and shorter beam in town driving to illuminate pavements and crossings, while a different setting is used for high-speed driving which elongates the beam, yet lights up adjacent lanes on motorways. It can also adapt to weather conditions, how heavily laden the car is, and which way the wheels are pointing. It gradually switches between the different settings, so the driver isn’t distracted. 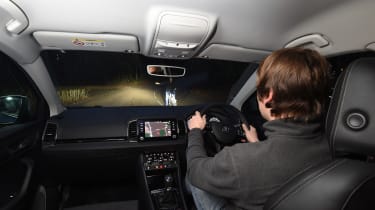 For an additional £200, the Karoq’s headlights can be further specified with an automatic high-beam function. This uses a windscreen-mounted camera to scan the road ahead, enabling the car to automatically switch from high to low beam each time a car passes.

LED headlights are great for seeing further in a straight line, then, but the Karoq can also illuminate its way around bends and junctions thanks to its LED cornering fog lights. Activating as soon as the wheel is turned, the angled beam shines the required fog light around the corner, extending the beam pattern significantly. It’s particularly effective at town speeds, allowing you to take evasive action far sooner than you would if you had to rely on the forward-facing beam.

The Karoq also features a slim strip of LEDs at the bottom of the headlamp acting as daytime running lights. At night, the head and tail-lights activate when the Skoda is unlocked or locked to guide you towards the car or to your front door. These convenience features, plus the evident safety aspect, show LED lights are far from being all style and no substance.

Read our guide on when to use fog lights…