We visit Skoda’s Live Tour, the online showroom helping people get an insight into the Karoq 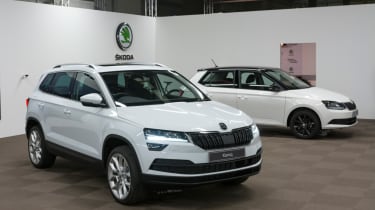 It's no secret the car industry is slowly going digital. From ride sharing apps to mobile mechanics, manufacturers are gradually evolving the way we buy and own cars thanks to some clever technology.

Last April, Skoda became the first maker in the UK to launch an online showroom where potential buyers are given live walking tours of a car they’re interested in by product hosts using a real-time video feed, called Live Tour.

Interestingly, the Karoq has become a cornerstone behind the success of Live Tour, helping it move from a pilot project to a permanent part of Skoda’s sales strategy. To see how the digital dealership works and the advantages it offers over a traditional showroom visit, we headed over to the Live Tour studio inside the Volkswagen Group National Learning Centre in Milton Keynes for the day.

With its white walls and multiple cameras, the Live Tour studio certainly stands out from a traditional showroom floor. But the purpose of Live Tour isn’t to compete with dealers; instead it’s to complement them. “The ultimate aim [with Live Tour] is to establish a test drive with one of our main dealers,” explains John French, head of sales operations at Skoda UK.

“We’ve had over 2,000 interactions with Live Tour since April, and have seen around a 40 per cent conversion rate for test drives following an interaction. This is compared to 25 per cent from dealer visits and five per cent compared to the Live Chat function,” continues French.

Part of Live Tour’s success, he claims, is down to its “extension of convenience and opening hours in a non pressure environment”. Open from 11.00 to 21.00 on weekdays and 11.00 to 19.00 on weekends, it allows potential buyers to get home from work, login from their laptop, mobile phone or tablet and have a 15-20 minute personal tour around a car they’re interested in.

Potential buyers can contact Skoda directly and ask for a tour, or set a date and time for the specially trained Live Tour product hosts to call them back. 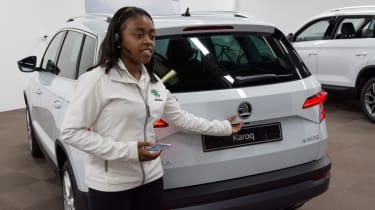 Monique Taylor-Morris, a Skoda Live Tour product host, explains the process: “I’ll start on my computer and make sure they [a customer] can see me well. I’ll then ask them a few questions about the kind of needs they have for a car, before going into the studio where the cars are,” she says. She’ll then use various cameras dotted around the studio to give the customer different views of the car, all controlled through her smartphone, before moving on to the interior.

With her headset, she can answer any questions the customer has and point the mobile phone camera to any part of the car for added video. “Many people are keen to find out more about the infotainment or how the VarioFlex seats work in the Karoq,” she says.

John French explains the product hosts use props such as bicycles or luggage to showcase things like boot space. “Not every one knows how 588 litres of boot space translate into real life, so it helps drive the point home.” But the product hosts don’t pressure you to buy a car. Rather, their job is to answer any questions, and if the buyer shows interest, pass their details to a nearby dealer who will then contact them regarding a test drive or brochures. 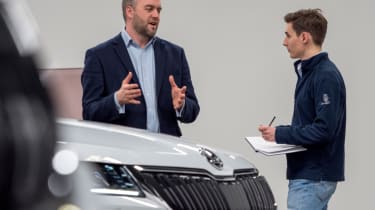 Another advantage that Live Tour has is that it brings a dealership experience to some who may not always have easy access. “It’s useful in other forms of retail, from Motability customers to potential fleet handovers,” French stresses.

He cites an example of a long-term Motability customer who previously was never able to visit her Skoda dealer to look at new cars, but had to pick from brochures brought back by her husband. “With Live Tour she could get a first-hand account of her new car,” French adds.

French also says Live Tour could play a key role in fleet handovers, adding: “If we are going to deliver 50 cars to a fleet operator, it would make sense to have all 50 drivers tune into the Live Tour feed and ask any questions they have.” 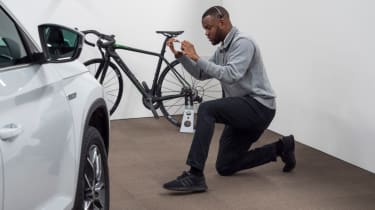 And while there’s also scope in using Live Tour for internal training at Skoda, French says another key advantage the digital showroom brings is creating interest in new cars.

“Last year, we brought nine left-hand-drive Kodiaqs to the UK before they were officially in showrooms and showcased them at different dealers in key areas. That was a lot of logistics and work."

“In October last year, we got a left-hand-drive Karoq into the studio and have instead showcased it via Live Tour. The Karoq got 15 per cent of all the interactions last year,” French says.

It’s likely that future Skoda models could follow the same path – first shown via Live Tour before they hit the dealers.