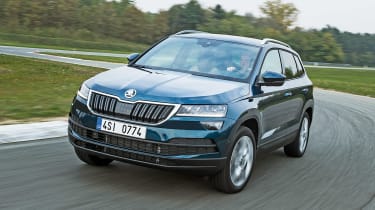 You would be hard pushed to describe Skoda’s latest small SUV as revolutionary, but it does everything you’d want from a model in this market. There’s loads of room in the boot and back seats, plus plenty of equipment on board. It’s good to drive as well, and although our enclosed test route didn’t allow a final verdict on ride quality, the Karoq shows promise in that area as well. Top-spec cars look a bit expensive, but we’ve no doubt the class leaders will have a fight on their hands when we put them up against the new Karoq on UK roads.

Skoda’s new range of SUVs started with a winner. The excellent Kodiaq seven-seater was crowned Best Large SUV at the 2017 Auto Express New Car Awards, and has subsequently won a series of tough road tests. That’s set expectations high for the smaller Karoq – but can it match its bigger brother’s top mix of practicality, dynamics and standard equipment?

Despite the demise of the outgoing Yeti, the Karoq is not a direct replacement for the boxy SUV. It’s 20cm longer than the old car and much bigger inside.

We first drove a prototype version of the Karoq way back in May, and came away impressed by the newcomer. But this is our first chance to try a production version of Skoda’s small SUV – albeit on a limited run around the challenging Centro Sperimentale Balocco in northern Italy. 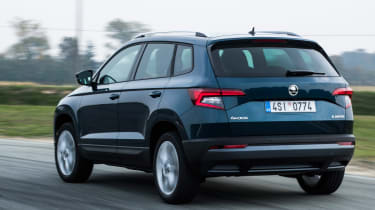 Visually, the Karoq reminds us of the larger Kodiaq in many ways, with that recognisable Skoda grille and headlights, and the sharp creases in the bodywork.

But it’s not the other Skoda this car has to worry about. Instead, it’s talented rivals including the Peugeot 3008, Mazda CX-5 and SEAT Ateca that the new Karoq will go up against. It’s based on the same MQB platform as the Ateca, and both models have the same 2,638mm wheelbase.

However, the Skoda’s VarioFlex sliding rear seat (lifted from the Yeti) means that – depending on your configuration – it offers more legroom and more boot space than its Spanish sibling. While the Ateca has a 510-litre capacity, the Skoda provides between 479 and 588 litres. The boot is square and the opening is wide, so the Karoq definitely upholds Skoda’s reputation for building particularly practical cars. There’s loads of legroom with the seats set back, and the high roofline means even taller passengers won’t feel cramped in the rear cabin.

In the front there are comfortable seats and an easily adjustable driving position. The cabin and dashboard design will be familiar to anyone who’s been in a Kodiaq or even a new Octavia; the materials, switchgear and instrument dials are all virtually identical. 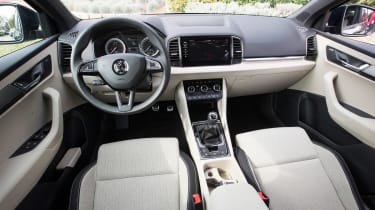 That’s no bad thing, because the Skoda’s clean look is appealing and feels upmarket. It’s not as interesting as the 3008’s interior, nor are the materials as tactile, but it’s on par with the closely related Ateca.

Unfortunately, we were unable to try Skoda’s interpretation of VW’s Active Info Display, but the digital dials will be available to order towards the middle of next year. Still, our left-hand-drive test car featured a 9.2-inch Columbus central touchscreen, which comes as standard on top-spec Edition models in the UK. It’s the same unit found in other cars in the Skoda range, and brings European mapping, voice control and built-in WiFi. Gesture control is standard as well, along with wireless smartphone charging.

It’s one of the best screens of its type and is much more responsive than the displays in rival cars. It’s intuitive and looks good, too, although it does pick up fingerprints easily and can be fiddly to use on the move. 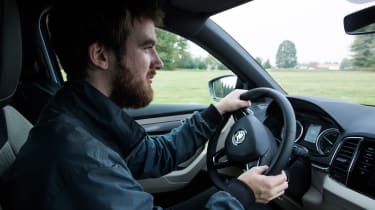 Smooth tarmac on our test route prevents us from delivering a definitive verdict on the ride quality, but on first impressions the Skoda does feel more compliant than the Ateca without losing too much in terms of agility. The steering is light but accurate, so it’s easy to place on the road. There’s not a lot of feel through the wheel, but while it isn’t as composed as the SEAT through fast turns, the Skoda is still good to drive. Just like the Ateca, the Karoq has a light manual gearshift, although it’s precise and pleasant when hooked up to the new 1.5-litre petrol engine.

With 148bhp, the new unit has plenty of performance; it matches the older 1.4 TSI in the Ateca for power. The 0-62mph time of 8.4 seconds is a tenth faster than the SEAT’s, but you’re unlikely to notice much difference on the road because the engines’ 250Nm maximum torque figures are identical.

As with the 1.4, it’s quiet at low revs, and with claimed economy of 51.4mpg it’s on par with the SEAT for efficiency. We’ve yet to try the diesels, or the smaller 1.0-litre turbo. 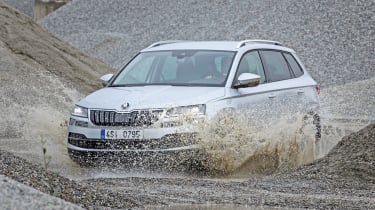 There’s also the option of a DSG auto and 4WD, although our car was a front-drive manual. Still, it did have selectable driving modes, with Normal, Sport and Eco settings. These change the profile of the engine and throttle; 4x4 models add an off-road mode.

While the top-spec Edition has 19-inch alloys and that 9.2-inch display screen, its £27,110 asking price is more than a £25,300 148bhp SEAT Ateca in plush Xcellence trim. A Karoq SE L looks better value – and Skoda will offer you two free services and £1,500 towards your deposit if you opt for one of its competitive PCP deals. On a 10 per cent deposit, a 1.5 TSI SE L will cost around £334 per month – just a couple of pounds more than an equivalent Ateca SE Technology.