What are the best new cars to buy in the UK right now? The 2017 Auto Express New Car Awards reveal all... 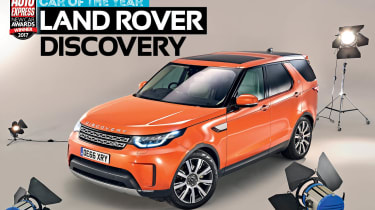 The relentless pace of development in the new car market has continued over the past 12 months, with manufacturers launching a thrilling array of new contenders in all classes. From city cars to supercars, the automotive landscape is changing, especially as more and more technology creeps in.

It’s never been a more exciting time to buy a new car as a result, but at Auto Express we know it’s not an easy decision. That’s why our vastly experienced team has analysed every single new car on the market to find out which should top your shopping list.

This is the 2017 Auto Express New Car Awards, your guide to the best new cars on sale in each of the car market’s key sectors. Click the links below or at the top left of this page to discover our new car awards winners and highly commended models in each category. You can also look back at the previous winners of the New Car Awards.

We presented the 2017 New Car Awards at an exclusive ceremony the the Hilton Bankside in London with live coverage of the event on our social media channels. Get a flavour for the event below, where you’ll find our Twitter feed and Facebook Live video.

Follow us on our social media channels to keep up to date with all the latest new car news as it happens and join the debate on the #AEAwards hashtag.

At Auto Express we’ve been at the cutting edge of all the latest developments in the UK car market, road testing hundreds of cars, analysing the big consumer issues and bringing you the big car news stories, first. Choosing the New Car Awards winners was a tougher job than ever this year but we think we’ve identified the cream of the crop. Have your say on our judges’ verdicts in the comments section below…

Over the last 12 months we’ve seen manufacturers responding to the challenges of air pollution with advanced new electric and hybrid powertrains as well as through more efficient petrol and diesel engines. The rise of the SUV has continued with more manufacturers entering the growing markets for everything from compact crossovers and to luxury 4x4s.

Autonomous driving tech has continued to creep into our vehicles with more advanced driver aids to boost comfort and safety. But the essential thrill of driving hasn’t been forgotten. We’ve been treated to an incredible collection of cars designed expressly to capture hearts with their design, performance and handling. Power figures and speeds have climbed as sprint benchmarks and lap times have tumbled. In short, it’s a great time to be a car buyer and car fan.

At Auto Express we’ve been at the cutting edge of all these developments, road testing hundreds of cars, analysing the big consumer issues and bringing you the latest car news, first. Choosing the New Car Awards winners has been a tougher job than ever this year but we think we’ve identified the cream of the crop and this evening, you’ll finally get the chance to have your say on our judges’ verdicts.