The Citroen Grand Grand C4 Picasso is the 2017 Auto Express MPV of the Year, with the Renault Grand Scenic and SEAT Alhambra commended 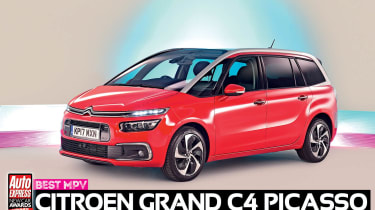 As our reigning champion in the people carrier class, the Citroen Grand C4 Picasso faced a tough challenge in 2017 from the all-new Renault Scenic and Grand Scenic, but for the fourth year in a row the seven-seater takes the Auto Express Best MPV award.

Despite the rise in popularity of family SUVs, this class of the market still presents big business, and if you need to ferry your brood around, the Grand C4 Picasso is still the seven-seater of choice after a facelift over the past 12 months.

Any MPV has to be family friendly, and with the roomiest seats in the third row, plenty of space in the second row and the big windscreen providing lots of light up front, the Citroen leads the way in this market.

You can slide the middle row of seats to prioritise legroom or boot space in five-seat configuration, too, while all five rear seats fold individually. There are 165 litres of boot space with all seven seats in place, and this rises to a maximum of 793 litres in five-seat form. Fold the second and third rows, leaving a fully flat load space, and there’s enough room (2,181 litres) to rival some small vans.

You’ll be hard pushed to notice the very minor tweaks to the styling, but the extra connectivity the Grand C4 offers will be a boon to families. Apple CarPlay, WiFi hotspot capability and a power tailgate are all available to ensure the Citroen slips into your life seamlessly. The twin-TFT-screen infotainment system looks great and is relatively easy to operate, while the cabin has been thoughtfully designed. It looks unique, but crucially it’s functional, too.

That’s the C4 Picasso’s strong point – and it even extends to the powertrains. This facelifted model offers turbo petrol power, but the 1.6 and 2.0-litre turbodiesels are still likely to be the more popular choices. 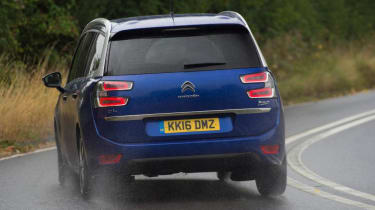 Although the standard manual gearbox is rubbery and indistinct, the six-speed automatic suits the car’s relaxed character well, and with claimed fuel economy of up to 74.3mpg and CO2 emissions as low as 100g/km in a car of this size, the frugal-to-run Citroen shows it has it all.

Even when the C4 Picasso is fully loaded the 1.6-litre BlueHDi diesel engine serves up enough performance, while Feel trim comes packed with equipment as standard. These features make the most of the car’s convincing refinement, so it’s worth spending the extra for a few more creature comforts. 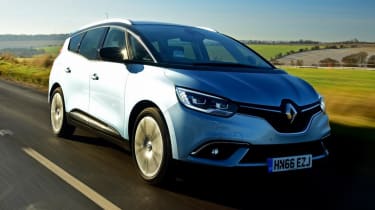 The new Grand Scenic is an excellent effort from Renault. It’s not quite as practical as the Citroen, but the cabin is incredibly slick, with the tablet-style infotainment system and ambient lighting on higher-spec models giving an upmarket feel. But this doesn’t come at the expense of practicality, as the Renault is a versatile and stylish seven-seater that’s surprisingly good to drive. 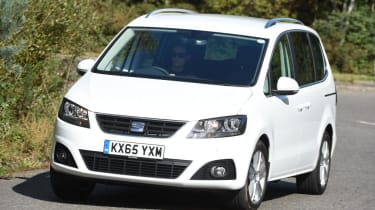 SEAT’s ageing Alhambra MPV still has plenty of appeal as family transport. It’s not as big as the Citroen and doesn’t feel as fresh as the Renault, but it has a charm that’s helped by the practicality boost its sliding rear doors provide. However, with SEAT’s new seven-seat SUV on the way, are the Alhambra’s days numbered?