The Scenic upholds Renault’s reputation for producing practical and desirable MPVs. It rivals the Citroen C4 SpaceTourer for style, while its interior is fractionally ahead for quality and upmarket appeal. It’s also spacious, well equipped and cheap to run. Yet it’s undermined by its inconsistent ride and poor refinement, plus it can’t match the SpaceTourer for family-friendly features.

Behind the 2016 Scenic’s shapely body and massive 20-inch wheels, it’s a practical proposition with loads of useful storage areas and seats that flip and fold easily. Legroom is a little tight in the back for adults, though, and a Citroen C4 SpaceTourer is more spacious. The interior is solidly built in the main, too, with plenty of the latest tech to keep driver and passengers happy.

MPVs like the Renault Scenic are a dying breed. While the first Megane Scenic was a breath of fresh air for family transport, and the MPV used to be the go-to car for buyers wanting more space than a hatchback could offer, these days, an SUV is likely to be the first option. As a result, there aren't as many MPVs for sale as there used to be, but if you need more space, or the versatility of a 7-seat interior, the the Scenic is a top choice.

Not least because it trades on having a unique look. There are hints of SUV in the Scenic's appearance, while the large wheels give it a concept car look. There are 5-seat and 7-seat Grand Scenic models offered, while the engine range is narrow, but delivers a good mix of performance and economy.

The main rival for the Renault Scenic is the Citroen C4 SpaceTourer (formerly C4 Picasso). This is also offered as a 5 or 7 seater, and it too trades on having a unique look, although it also has a bit more space than the Scenic. Elsewhere, the Ford C-MAX and Grand C-MAX are great to drive, but they're not going to be replaced once they go off sale in mid-2019. The Kia Carens, BMW 2 Series Active/Gran Tourer and Volkswagen Touran are three models that offer seven seats, but aren't quite as spacious as the Renault. If space is your prime requirement, then van-based MPVs such as the Peugeot Traveller, Citroen SpaceTourer and Toyota Proace Verso are more car-like to drive than ever, or there's even the Renault Trafic Passenger to consider.

The ascent of the SUV means the Scenic has other rivals to consider, too. If you're intent on owning a Renault, then the Kadjar and Koleos SUVs are available, while the Nissan Qashqai and X-Trail use similar running gear, plus the latter can be had with seven seats. There are also other seven-seat SUVs in the form of the Skoda Kodiaq, Peugeot 5008, Honda CR-V and VW Tiguan Allspace. 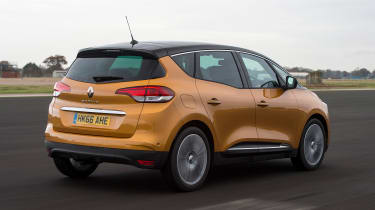 Nowadays compact MPVs compete as much on their funky styling as their practicality. While the Scenic launched in 2016 is still based on a Megane hatchback platform like its 1990s predecessor, it’s a significantly more eye-catching design that owes much to the current fashion for SUV/crossovers.

Another range update in 2018 saw the trim line-up change to Play, Iconic and Signature models, but that at least means all cars are pretty well equipped. All cars get alloys, keyless go, Bluetooth connectivity and climate control. Spend more and you can have sat-nav, parking sensors, an 8.75-inch infotainment system, head-up display and 11-speaker stereo. Leather and LED headlamps are reserved for Signature cars.

There's one petrol and one diesel engine to choose from, but both can be had with either a six-speed manual or six-speed auto gearbox. The 1.3 TCe 140 turbo petrol has 138bhp and is designed to meet the latest emissions regulations. The diesel is a modern 1.7 Blue dCi 120 unit. This 118bhp engine is again bigger than the 1.5 dCi it replaced, which helps it to deliver good performance while still managing to meet emissions laws.

Prices for the Scenic start from around £23,000, and rise to a modest £28,000, meaning the Scenic offers a lot of variety in a narrow price band, and a lot of space for the money. Go for a Grand Scenic, and you'll pay a premium of around £1,800 for the increased space and additional row of seats.

There are five engine choices, all of which are of modest capacity. There's a 1.2 TCe turbo petrol in 115 guise in the Expression+, while the rest of the range has a 130 version of the same engine. For diesels, there's the trusty 1.5 dCi 110, while the larger 1.6 dCi comes in 130 form, or 160 guise in the top-spec Signature model only. 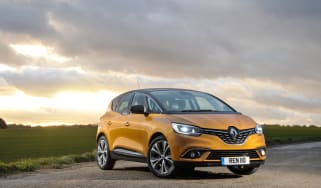 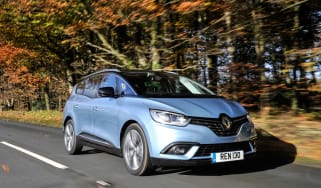 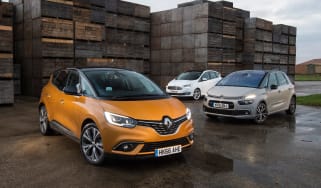 Renault hopes to breathe fresh life into the MPV class with its new Scenic. Can it see off the Citroen C4 Picasso and Ford C-MAX?
Advertisement
Visit/renault/scenic/93862/new-2016-renault-scenic-mpv-starts-from-21500 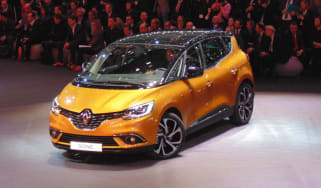 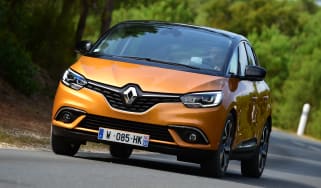 It's make-or-break time for the new Renault Scenic - can its style and practical cabin steer buyers away from SUVs?
Visit/renault/scenic/20561/2009-2016-mpv 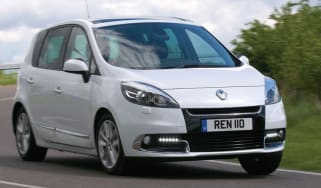 The Renault Scenic is a five-seat MPV that offers practicality, refinement and low running costs
Visit/renault/scenic/92833/new-renault-scenic-aims-to-make-parents-fall-in-love-again 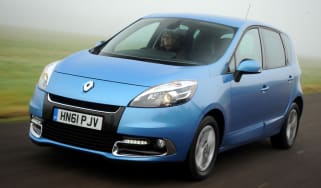 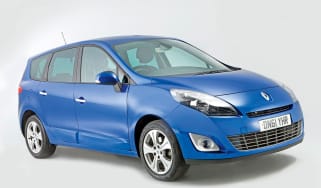 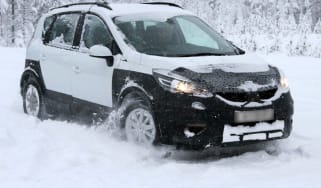 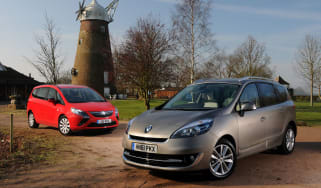 Renault is rethinking its strategy in Britain – and a new Grand Scenic is leading the way. Here it faces the Vauxhall Zafira Tourer
Visit/renault/scenic/19321/renault-grand-scenic 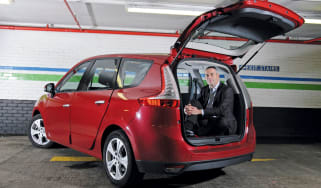 Our MPV gets put through its paces on a family holiday - and passes with flying colours.
Advertisement
Visit/car-reviews/14290/new-meriva-vs-rivals 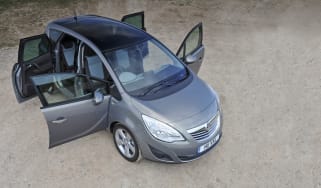 With its revolutionary doors, Vauxhall’s new Meriva is grabbing all the headlines. Can it beat key rivals?
Visit/car-reviews/14198/renault-scenic-vs-rivals 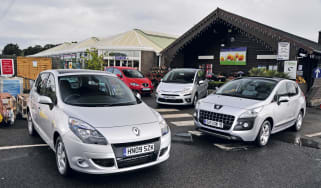 Renault’s latest Scenic is targeting buyers with expanding families. Is it better than Peugeot, Citroen and SEAT rivals?
Visit/renault/scenic/17500/renault-scenic 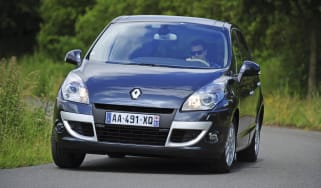 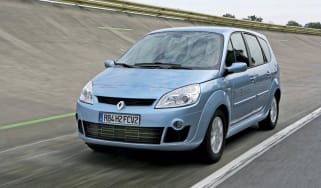 Hydrogen power has arrived in the MPV sector – but just how practical is it?
Advertisement
Visit/renault/scenic/21120/2007-2009-mpv 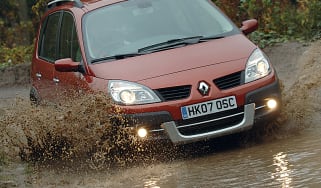 The family-friendly Renault is more of a spec choice than a standalone mud-plugger.
Visit/renault/scenic/16905/renault-scenic 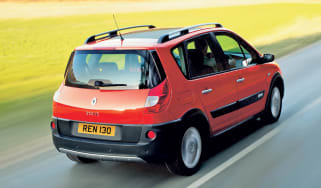 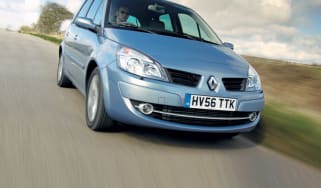 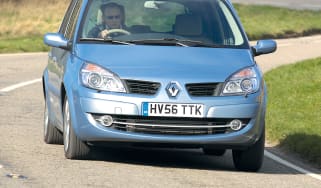 As an all-rounder the Scenic and, in particular, the Grand Scenic are hard to beat. Either makes a cracking compact MPV with few flaws.
Visit/renault/scenic/16596/renault-scenic 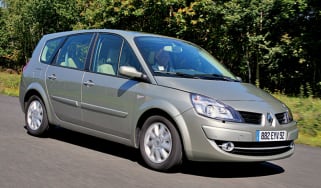 With the Scenic's glass roof and versatile seating arrangement, Renault is promising a room with a view
Visit/renault/scenic/16362/renault-grand-scenic-exp-dci 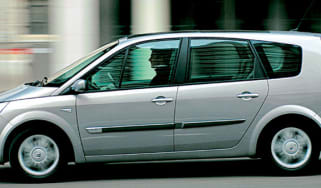 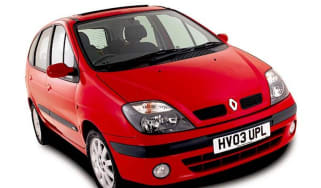 What to look for, how much you should pay and what can go wrong with the trendsetting Renault Scenic
Visit/renault/scenic/15950/renault-grand-scenic 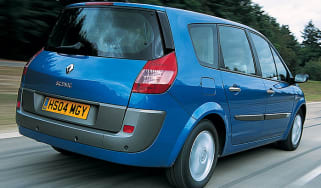 When it comes to people carriers, Renault is king of the school run. With a range of family ferriers which runs from the compact-MPV Modus to the full…
Skip to HeaderSkip to Content