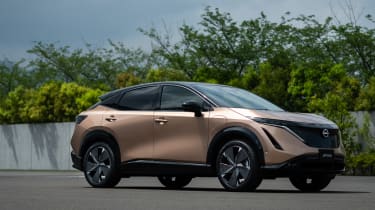 This is the Nissan Ariya, an all-new, pure-electric SUV from the company that revolutionised the family car market 15 years ago with the Qashqai, and introduced the first mainstream EV, the Leaf, in 2011.

Described by the Japanese manufacturer as a ‘coupé crossover’, the Ariya sticks pretty close to the design of a concept that was revealed at last year’s Tokyo Motor Show. It’s 4.59 metres long – so closer to the dimensions of the X-Trail than the Qashqai – and has a look that’s more an evolution of the current Leaf’s than a close relation to the rest of Nissan’s line-up.

At the front, there’s a closed grille – flanked by 20 LEDs making up what Nissan calls a ‘shield’ – to highlight the fact that the Ariya is electric only; not even a plug-in hybrid version is planned. Ultra-slim LED headlights, which include four 20mm projectors each, are combined with animated indicators. The grille itself houses a plethora of sensors to help with Nissan’s ProPilot driver-assistance systems.

The profile shows how long the Ariya’s wheelbase is – 2,775mm, so 70cm longer than an X-Trail’s – with a slightly stretched look exacerbated by a ‘floating’ roofline that tapers away noticeably towards the rear; a single arch of chrome helps to fool the eye and give the car an even swoopier look.

The rear has a strong shoulder crease integrated into the bootlid, along with a single ‘light blade’ that is designed to look black when the car is switched off. The model in these launch images has a two-tone copper package called Akatsuki, but the Ariya will be available with six two-tone combinations (each with a contrasting black roof), as well as four full-body paint finishes. 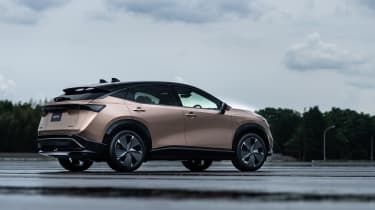 The Ariya sits on a new architecture developed by the Alliance that also includes Renault and Mitsubishi. Called CMF-EV, it was designed from the outset for pure-electric vehicles alone. The new model will be offered with a choice of front or four-wheel drive, along with a pair of battery options and a variety of electric motor outputs.

The entry point for the range will be a front-wheel-drive edition producing 215bhp and 300Nm – enough to take the car from 0-62mph in 7.5 seconds and on to a top speed of 99mph. It gets the smaller of the battery options, 65kWh (or 63kWh usable), which Nissan claims will give the car a 233-mile range under the tougher WLTP test regime. That is helped by this being the lightest Ariya offered, at around 1,800kg. The next model up gets a bigger 90kWh battery (87kWh usable) and a more potent 239bhp front-drive motor, presumably to help shift the extra mass that comes with the additional cells. As a result, performance remains similar, while there’s another 77 miles of range, totalling 310 miles.

Three Ariyas will be available at launch with Nissan’s electric four-wheel-drive system, called e-4ORCE. The 63kWh edition has a 275bhp set-up for a 0-62mph time of 5.9 seconds and a range of up to 211 miles, and then there’s an 87kWh version with 302bhp and up to 285 miles of range.

The range-topping Ariya will be the 87kWh Performance, which has a whopping 389bhp and 600Nm of torque for a 0-62mph time of just 5.1 seconds. But it takes a hit in range to achieve these numbers, managing up to 248 miles under WLTP. Smaller-battery editions of the car will get a 7.4kW AC charger for home connections, while the 87kWh versions include a 22kW three-phase set-up. Nissan says the Ariya can support up to 130kW DC charging, but there’s no word yet on whether this will be made standard on all models. Nissan says the technology will allow up to 375km (around 230 miles) of range to be added to the Ariya’s battery pack in around 30 minutes.

e-4ORCE can control the levels of torque delivered between the front and rear, but it stops short of full torque vectoring across each axle; instead it uses the brakes at each corner to help improve the newcomer’s agility and handling on the road.

The Ariya’s cabin treatment represents perhaps the most major departure from Nissan’s current range, with a radical layout that mixes higher-quality finishes and technology. The dashboard is dominated by a pair of 12.3-inch screens – one is a central display for the infotainment system and the other an adjacent digital instrument panel that sits ahead of the driver.

Nissan says the two screens can function independently or, when required, as one operating environment, allowing information to be ‘swiped’ between them. Voice control also features, via a digital assistant activated by the phrases ‘Hello Nissan’ and ‘Hey Nissan’. The dash itself features no physical buttons; they’ve been replaced by haptic touch-sensitive controls integrated into the smart grained material that runs across the fascia. 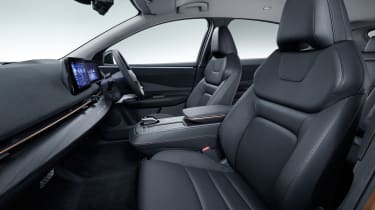 The Ariya’s system includes 4G connectivity and is the first ‘always-on’ Nissan that can receive over-the-air updates to everything from the infotainment system to the chassis and EV settings. Smartphone integration will allow appointments and climate control instructions to be fed to the car in advance of any journey, too.

Elsewhere in the cabin, there’s extensive use of either plush materials or simple, textured surfaces; the overall look is considerably more premium than any Nissan we’ve seen before. Under the instrument panel there’s a storage box that incorporates a slide-out tray that can turn the front cabin into a mobile office. And the flat floor and relatively long wheelbase should deliver good space for rear-seat passengers.

The boot capacity is 466 litres on two-wheel-drive cars, but e-4ORCE models lose a little of that because of the additional motor; their load bay stands at 408 litres.

The Ariya should arrive in UK showrooms within the next 18 months. No prices have been announced but we’d expected the car’s figures to begin roughly where those of top-end Leafs stop. That would give the Ariya a starting price of around £37,500 before any plug-in car grant, rising to just shy of £50,000 for the 87kWh Performance version.

What do you think of the Nissan Ariya? Let us know in the comments below...

Just like Volkswagen, Nissan has revealed a new logo to kickstart its EV revolution
Skip to HeaderSkip to Content