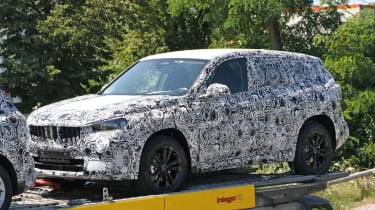 BMW has confirmed it will add another all-electric SUV to its range with its smallest SUV model - the X1 -  next in line to benefit from the electrified treatment.

Exclusively revealed by our sister title Driving Electric, the new model, set to be called the BMW iX1, will offer buyers a greater choice in a very popular market segment. BMW has only confirmed that the iX1 project is in the works and nothing more. But given that the existing X1 was recently subjected to a mid-life facelift, we expect the electric iX1 will form part of the next-generation X1 line-up due in 2022 and pictured in the spy shot above.

A launch of the electric version before 2023 is certain, as BMW has stated that the iX1 will form part of its drive to slash its average CO2 emissions through the range. This will see over 25 new electrified models from the BMW Group (indlucing BMW, MINI and Rolls-Royce) launch within that time frame - and half of those will be fully electric.

Official specs for the iX1 are still to be confirmed, but the new model is set to ride on a heavily reworked version of the current car’s UKL platform. An electric version of this platform is already in use under the new MINI Electric, though expect the BMW to feature the brand’s next generation of EV tech - first shown in the upcoming 282bhp iX3 - and therefore larger performance and range figures than the MINI.

With its next X1, BMW will aim to cater for as many buyers as possible: not only will the iX1 be fully electric, but the X1 will sit alongside it, offering diesel and petrol mild hybrid options, plus a plug-in hybrid model. This mirrors the approach, dubbed “Power of Choice” that BMW is taking with the next 5 Series and 7 Series, too.

The move by BMW to expand its electric fleet is part of wider measures by the group to reduce its overall carbon footprint. By 2030, the Group aims to lower supply chain CO2 emissions to 20 percent below levels recorded in 2019, while an 80 percent drop in emissions from its factories and other sites is targeted by the same date.

Check out the latest on BMW's electric 7 Series here...

The all-electric flagship BMW iX SUV boasts over 500bhp, 376 miles of range and 5G tech
Skip to HeaderSkip to Content