Ever felt yourself nodding off at the wheel? 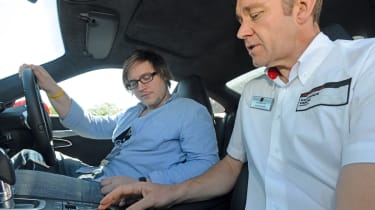 Ever felt yourself nodding off at the wheel? Two of our readers admitted they had – and both were impressed by the lane departure warning system.

It’s part of the Focus’s £1,050 Driver Assistance Pack, using the camera to scan the road from the top of the screen. By tracking the white lines in the road it detects if you drift into another lane, and vibrates the steering wheel or gives a gentle tug on the electric steering to pull you back into line.

Sam thought it’d be great for motorway drowsiness. “I like the fact it takes things out of your hands and corrects your fault,” he said. Aaron also gave it a thumbs-up, although he felt “the vibrations might be too subtle”. Most of our panel agreed with this view. Mike felt “there wasn’t enough of a vibration”, adding: “I don’t think it’s necessary, and wouldn’t pay extra for it.”

Another Ford function is the blind spot information system, which flashes a warning on the door mirror if a car is overtaking. Peter wanted it for his son, saying: “As a youngster I’d change lanes and notice at the last minute.”