The Karoq follows the success of the Kodiaq with another striking look. We learn how it evolved 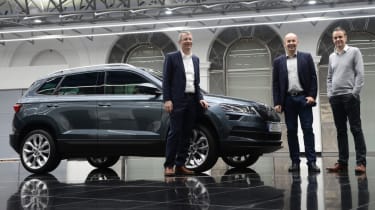 When discussing the design of Skoda’s new Karoq, it is impossible to ignore the influence of two different cars from the Czech manufacturer.

The first is the Yeti, the hugely popular crossover that proved a great success with buyers, particularly here in the UK, where it topped Auto Express’s Driver Power owner satisfaction survey on three separate occasions.

The second is the Kodiaq, the Karoq’s bigger brother, which was launched to huge acclaim last year and named Best Large SUV at our 2017 New Car Awards. 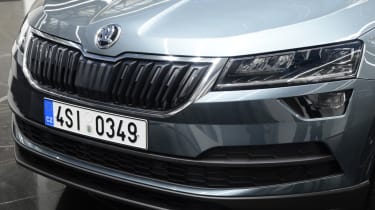 As with the cars themselves, their influence was wildly contrasting. Put simply, the Karoq, as replacement for the Yeti, had to look hugely different from its boxy predecessor, which felt like a flagbearer for a different era at Skoda.

But it clearly had to offer similar design themes to the Kodiaq, which was the model chosen to lead the brand’s SUV offensive, a critical component of CEO Bernhard Maier’s Strategy 2025, which aims to deliver significant sustainable sales growth for the company.

Head of exterior design Karl Neuhold acknowledges the key role the Yeti had in establishing Skoda as a force to be reckoned with. “The Yeti was our first time in the crossover segment in 2009 and was very successful, right until the end,” he says.

However, it was beginning to show its age, and with the SUV strategy central to Skoda’s plans for expansion, there was a realisation within the firm that as well loved as the Yeti was, there was a need for a fresh, more modern approach. Put simply, the days of ‘quirky’ Skodas like the Yeti and Roomster mini-MPV were coming to an end. 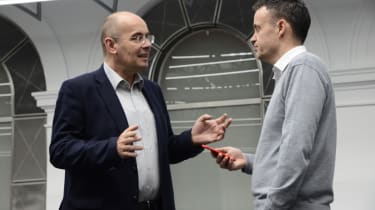 While the Yeti had impressed everyone with its functionality, flexible seating system, all-round ability and value for money, the one area in which it had failed to convince entirely was in terms of design. Speak to Skoda insiders and the word ‘polarising’ frequently crops up, particularly with regard to the abrupt, chopped-off rear.

So it was time for a fresh start with the Karoq, and Neuhold confirms: “With this car we started with a white sheet of paper; we did not have any link with the Yeti anymore.” Instead, the new car would follow the blueprint of the Kodiaq. Although launching a year earlier than the Karoq, the Kodiaq was essentially developed in tandem with its smaller brother, with which it shares the Volkswagen Group’s MQB A platform.

This was an intentional strategy, Neuhold admits. “It was almost designed side by side with the Kodiaq,” he says. “But we had a clear message which direction to go, which made things easier and better. From this one platform [MQB A], we could have an SUV programme with more than one pillar. First of all came the Kodiaq, our top SUV model, equivalent to the Superb limousine.

“We wanted to develop a completely new design language, following our Skoda DNA principles, and we started with a bold experience, but still clean, clear and precise, with a lot of crystalline elements, but everything robust and masculine.

“The Kodiaq did it in an impressive way, because there was clear differentiation to the limousines; it has a more three-dimensional grille. There’s sculpture on the surfaces that runs around the whole car and a lot of light, crystalline surfaces raising it up.” At the same time, Skoda’s designers had to adapt this new SUV look to a mid size car. The focus was clear: by removing some of the divisiveness of the Yeti’s styling, the Karoq would appeal to more customers and increase sales.

Continues Neuhold: “We wanted to reach a lot of clients and we had started with the Kodiaq. We had a clear strategy, we had something in mind which we wanted to follow. The Karoq is the smaller brother, but still shows a lot of surprising elements. It still has its own character. It is still clearly an SUV, but drawn a little bit finer.

“The roof is swoopy, very dynamic. The car is quite fast looking. The ‘tornado line’ runs through it. And there are a lot of light/shadow contrasts.” The same thinking that was adapted for the exterior of the car was applied inside, too. The Karoq offers a straightforward but attractive layout, with obvious similarities to its bigger brother. And it has a more upmarket ambience than the more utilitarian Yeti.

Norbert Weber, chief of interior design, explains that while the art of crafting a cabin is a very different discipline to creating the exterior, the objective with the Karoq was the same. 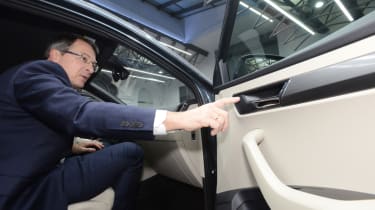 “But I want to bring an SUV language into the interior. We started with the Kodiaq and the Karoq came a little bit later, but from a design point of view we said: ‘Please keep the language of SUV’. We cannot show the customer the Kodiaq and then go totally different.”

An obvious example of this, says Weber, is the air vents, which are more vertical in their appearance than is the norm, as on the Kodiaq. This is now a key Skoda SUV interior design cue.

They also help accentuate the perceived width of the dash, which coupled with its raised height – compared to the brand’s conventional cars – helps create more of an SUV feel. The level of attention to detail is apparent, too, when Weber highlights a subtle line on the expanse of plastic ahead of the front passenger seat. The line itself is barely visible, but as Weber points out, it creates a contrast between the area above it and below it, making the whole area look more pleasing. 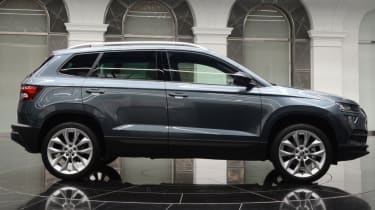 This search for perfection is, he feels, important for one very simple reason. “It means the car isn’t getting boring,” he smiles. “And that is important, as you see the car more from the inside than from the outside. I have this argument all the time with Karl Neuhold.”  While they may quibble, jokingly, about their individual areas of expertise, one thing both men agree on is that they have been backed to the hilt by their CEO.

“Design always have a lot of ideas, but what I really like here is that the board of Skoda have a really open ear for good ideas and then they spend the money. The board and Mr Maier are totally design oriented,” says Weber. And that has manifested itself in a handsome product, which is a world away from its boxy predecessor.

“I think it fits into the brand very well, and it’s a strong character for Skoda,” concludes Neuhold. “The Karoq has presence. It shows real quality. We want to reach a lot of people and the numbers already tell us we are on the right track.”

The art of sketching

One element that played a key role in the design of the Karoq, as it does in any car, was sketching. Whether done by pencil or digitally, the simple art of visualising ideas is a constant theme in the process. Says Karl Neuhold: “We produce endless numbers of sketches. But sometimes you need only one sketch; everyone likes it and it works out brilliantly.” 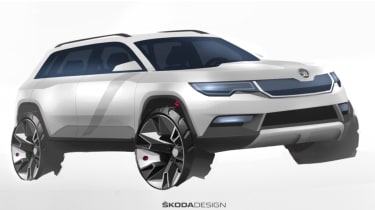 It is something the team is constantly encouraged to work on. “These sketches are done in the bathroom, beside the coffee machine or anywhere,” he says. “But sometimes we are always searching, with no result.”

The sketches pictured are from very early in the Karoq design process. According to Neuhold, the top one shows “we were already making some elements of the SUV – very pronounced wheelarches. We were searching for the SUV design language”. The smaller rear sketch was one of the first to show the characteristic shape at the back.