Going on a bear hunt: 900 miles in a Skoda Kodiaq

With Skoda’s SUV named after a bear, we decided to test its mettle on a 900-mile trip – in search of a grizzly! Let the fun commence... 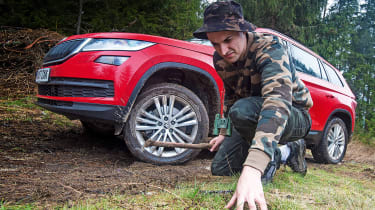 Those of a certain age or with kids may be familiar with a hugely popular children’s book called ‘We’re Going on a Bear Hunt’. Written by Michael Rosen, the 1989 picture book tells the story of five children and a dog who head into the forest to track down a bear, encountering several natural obstacles on their way. It’s a lengthy and arduous journey that ends with the group too scared to go out and hunt again, but we reckon they simply lacked the perfect tool for the job; the Skoda Kodiaq.

The seven-seat SUV has room for the five siblings, the dog, and (more sensibly) the parents to join in the bear hunt. It’s also appropriate because of its name: Kodiaq refers to the Kodiak brown bear that inhabits the island group of the same name in south-west Alaska.

While the Kodiaq isn’t yet sold in that part of the world, we thought we could get a true measure of what the car is capable of by conducting our own bear hunt closer to the Skoda’s birthplace. Starting in Prague, near the brand’s headquarters, we headed 200 miles east to the Slovakian border, then up to the High Tatras mountain region on the Slovakian border with Poland. There we spent the day doing our best to track down a bear in the comfort of the Kodiaq. After that we’d document our findings, brush the mud off and hit the road for a 400-mile slog back to Prague. 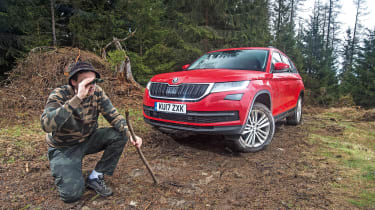 Our journey began outside Václav Havel airport, with the collection of a Kodiaq SE L with 187bhp 2.0 TDI diesel power, a DSG gearbox, four-wheel drive and vibrant Corrida Red paint. With no extra kit and standard road tyres, we were concerned about whether this family SUV would be up to the job. After all, the Kodiaq is designed to tackle the daily family grind, rather than climb mountains or ford streams. But our lack of confidence was soon to be proven premature.

Loading up the car proved easy, thanks to the massive 765-litre boot in five-seat mode. The underfloor storage compartment also came in handy to keep valuables out of sight and our food away from the noses of Yogi, Baloo and any other mammals we may encounter. As the Skoda’s electric bootlid whirred to a gentle close, it felt as if this trip would be more of a luxury jaunt than a bear hunt.

Rather than setting off into the unknown like the characters in Rosen’s book, we enlisted the help of the Kodiaq’s slick eight-inch touchscreen sat-nav to get us to the town of Vysoké Tatry, right at the foot of the High Tatras. With a tallest peak of 2,655 metres, the Tatras are far from being the highest or most remote mountain region in Europe, although that doesn’t stop it being a hub for species that are rarer in other parts of the continent.

There are wolves, mountain goats and a few critically endangered species, but we were looking for the Eurasian Brown Bear. It was almost eradicated due to hunting in the thirties, but recent estimates put Slovakia’s bear population at over 800 – that’s despite hunting there being reinstated in the sixties. This seemed like as good a place as any to catch a glimpse of one of the largest carnivores in Europe. 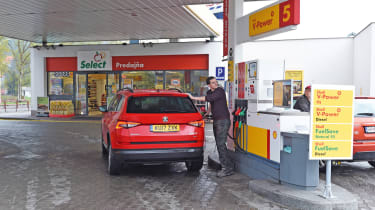 Between us and the High Tatras, though, was a sizeable chunk of the Czech Republic. After stocking up on ursine-related snacks at the services (Pom Bears especially proved a hit), we hit the road, leaving Prague and joining the E50 motorway direct to Slovakia. This was the part of the journey that should have been easy, but it seemed like the Czech authorities had picked that day to dig up and resurface the entire network. This meant miles of tight contraflows, 80km/h limits and jams. Thankfully, the Skoda’s traffic rerouting guided us off the main road before a big accident, saving us from hours of staring at the back of a stationary Polish truck. It put us on a twisty, hilly back road, where the Kodiaq’s tidy handling and strong grip meant it felt less barge-like than many similarly-sized SUVs.

The 2.0-litre diesel with the dual-clutch gearbox feels perfectly matched to the Kodiaq, too. It’s both smooth and punchy, staying subdued when taking it easy and yet feeling effortless on the steep, twisty inclines that we encountered.  At no point along the journey did we feel like we needed more performance, while fuel economy refused to dip below 40mpg.

Darkness approached by the time we entered Slovakia. There’s no physical border, rather a couple of unassuming signs and the odd police patrol pulling over suspect vehicles. It was the Skoda that first made us aware of the border crossing, with the screen helpfully flashing up Slovakia’s various speed limits.

By nightfall, it was the SUV’s bright and crisp full LED headlights (adjusted automatically for driving on the right) that came to our aid on long, unlit stretches of poorly surfaced roads. But even extra doses of ice tea and Haribo couldn’t fend off the inevitable tiredness. By the time we arrived at our overnight stop, we’d been on the road for about nine hours, with no aches and pains from the supportive part-Alcantara seats, but we still had to find somewhere to rest our heads for the night.

Next morning, it turned out that we’d unwittingly chosen the last two rooms in a western-themed roadside motel, although we had no chance for a hoedown as we took off to begin the hunt. At the foot of the mountain range, Vysoké Tatry is a cluster town that encompasses a big chunk of the region and several ski resorts. It also has a rather large pest problem: the town council declared a state of emergency last year, as bear sightings in inhabited areas increased dramatically, with five bear break-in attempts reported. On our arrival, the only physical evidence of bears were the sturdy-looking bins with huge bear-proof locks.

After consulting our map and visiting the tourist office, we found a hiking trail up the mountain where bears are often sighted. Aware that the amount of recent rainfall could make the terrain tricky, we stocked up on supplies and I donned my camo gear, planning to spend the day in the wilderness. The only preparation the car required was a check of the tyres and selecting ‘off road’ mode, which puts the powertrain and brakes in a setting more suitable for bumpy surfaces and activates the Hill Descent Control. 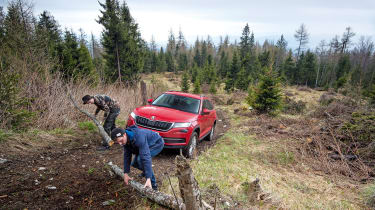 Initially the path was dry and clear, but full of sharp rocks that posed a threat to the Kodiaq’s tyres. Taking it easy paid off, though, and soon the surface switched to slippery wet grass, then even slipperier mud tracks. You might have thought our road-biased SUV was perhaps a bit out of its depth here, as green-laning locals and tourists had clearly frequented these tracks before in serious off-roaders. But we persevered, with the Kodiaq shifting power between the axles and pulling itself along with ease.

We made sure to stop regularly and scan our surroundings for signs of bear activity – after all, given adult males can weigh upwards of 350kg, we were sure to see physical evidence of their movements. There had been lots of forest management in the area, but we still spotted scratch marks on trees where bears often sharpen their claws. Confident we were nearing our first sighting, we persevered, lugging away rocks and fallen trees as the Kodiaq took everything in its stride.

Soon, the track opened by a small lake and some picnic benches. Deciding now was a good time for a lunch, we dug out our hamper and tucked in – remembering that bears are often attracted by the smell of food. After our break, we got going again, but stopping at regular intervals. It took us a while to navigate the trail, and the wet weather set in. Mud became the real enemy, spraying up the doors and testing the road tyres to the limit. 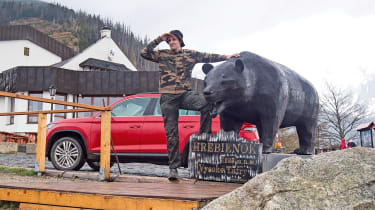 On a steep incline with deep ruts, the Kodiaq finally lost traction, so we stopped to check the map. Then, paw prints! Only a couple at first, but as we walked down the hill it became a 20-yard stretch of large, deep imprints that looked fresh. For all we knew our large, furry adversary could have been watching our every move from the safety of the forest – but the trees were too thick and close for us to spot it. We heard the rustling of leaves and twigs snapping in the distance, which was enough to give us both a bit of a fright, but we were acutely aware of the fact that we were alone and entirely defenceless halfway up a mountain. It was time to get going...

A joint decision was made for our own safety and sanity: get the Kodiaq moving and away as quickly as possible. The Skoda’s off-road screen and camera system helped us navigate sharp rocks, and after a few minutes of reversing and pushing we regained traction and scampered away. Pausing once more to see if we could spot any bear action, it looked like our vocal efforts to free the Skoda scared off anything near. And after several more fruitless hours trying to trace any signs of life on other trails, we gave up, dismayed at the lack of a money shot with a bear but grateful for the Kodiaq’s creature comforts.

Deciding to hit the road before the sun set, we had to agree on a plan of action: either we try to find a hotel mid-way along our journey back to Prague (not easy given how rural much of the route is) or complete the 370 miles in one hit. We chose the latter, feeling that the Kodiaq’s mile-munching prowess would soften the blow. Powering into the night with Otis’ Bluetooth music connection providing the backing track, the Kodiaq ate up the miles and even managed to recover its fuel economy figure from our day in the wilderness, recording a respectable 39mpg overall. It was 2am before we reached our overnight stop, and despite the best efforts of the car, we were drained.

Arriving at the airport, we handed back the keys to our Kodiaq with another 900 miles on the clock and plenty of evidence (inside and out) of its three days on a bear hunt. Despite this, we both came away admiring the SUV’s huge breadth of ability; it truly lived up to its billing as the most capable Skoda yet. It took the region’s harsh roads in its stride, was a really relaxing long-distance companion, had more space than the two of us could ever hope to fill, and it tackled terrain we didn’t think it would cross. A bear may have been elusive, but the Kodiaq was the star of our trip.