The Skoda Roomster has a spacious, versatile cabin, but a supermini driving experience 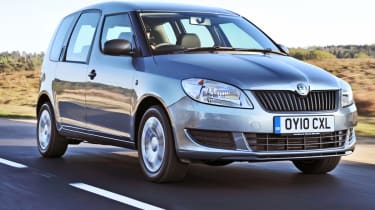 The Skoda Roomster is a family car that’s small on the outside and huge on the inside. Its main strengths are its practicality, driving dynamics and running costs. It has a large boot and spacious cabin, and those strengths are enhanced by clever touches that add to its flexibility.

For example, the seats can be easily folded and tumbled thanks to the excellent VarioFlex system. They can also be slid, reclined and removed, allowing owners to get the very most out of the interior space. The Roomster drives, well, too. It’s built on the same chassis that underpins the Fabia, and offers a comfortable ride with plenty of grip. And, thanks to a range of small-capacity engines, it’s cheap to fuel, tax and insure, too.

But for all its strengths, the Roomster is flawed. Firstly, there is its design. The high roofline and boxy rear end may help to create a spacious cabin, but they also make the Skoda an awkwardly proportioned vehicle. From the side it looks as though a supermini and a van have been mashed together. In short, it’s not a car that will appeal to many buyers on looks alone. The interior is also a little on the Spartan side. While the economical engines feel a little underpowered.

The entry level petrol engine is a 1.2-litre unit with 69bhp. It may be a tempting option because it’s so cheap, but it’s also incredibly slow. It struggles just to get the Roomster moving, so at best it’s really only suitable for use around town. The turbocharged 1.2-litre petrol engine offers 104bhp and is the pick of the bunch, offering smooth and punchy motoring and better fuel economy than the non-turbo 1.2 – it’s also more refined than the diesel options. The are two oil-burners, both 1.6-litre turbos. They both offer fantastic economy and decent pace but they lack refinement – both are loud and rattly when pushed. Thanks to its Fabia-derived chassis, the Roomster offers plenty of grip and accurate steering, but it’s tall stance means there is a bit of body roll through corners. Still, it’s comfortable and does an admirable job of keeping out wind and road noise.

Small capacity, low-powered engines mean that the Roomster will not only be cheap to insure but it will be cheap to fuel and tax too. A three-cylinder 1.2 TDI is cheapest but it's not particularly refined. If you can live with it the rewards come at the pumps, with a combined economy figure of 76.3mpg. The 1.2 TSI petrol engine in 104bhp guise manages 49.6mpg.

The Roomster is one of the oldest vehicles in the Skoda range, and it shows. The more modern models in the Czech firm’s line-up – like the Octavia or Rapid – may put function before form, but they also feature clean, elegant lines and classic proportions. The Roomster isn’t cut from the same cloth. It looks to be half supermini, half van. The nose, the triangular front windows and the sharply raked windscreen could be from any other model in the Skoda range, but they blend into a bulbous rear cabin with a squared-off back end. The rear and front windows don’t align, either. It all adds up to a car that looks a little bit like a clumsy cut-and-shut. The Roomster comes with a selection of stylish alloys, though, and you can pick from a range of bright colours, which help to emphasise the car’s quirkiness. And while the interior is a little on the drab side, it is spacious and incredibly functional, plus the materials are of a high quality.

Access to the boot is excellent, and the luggage area is a very useful 450 litres with the seats up. Stowing the chairs frees up a maximum capacity that's more than triple this figure, and doing so is a very simple process, thanks to the clever VarioFlex system. This sees the seats fold with one handle and tumble with the other. The two outer rear chairs slide and recline as well. We'd recommend you go for SE trim, because this includes extras like air-conditioning and electric rear windows that you dont get on entry-level S models. An optional panoramic glass roof helps to create an additional sense of space in the cabin.

The Roomster comes with six airbags as standard on top of ABS and ESP systems to help prevent accidents before they happen. Euro NCAP awarded it a five star rating for adult protection, four stars for child protection and two stars for pedestrian protection – but it was tested in 2006 and Euro NCAP has made its tests a lot more rigorous then. As a result it is hard to compare this performance with cars that have been tested more recently. Skoda regularly tops our Driver Power satisfaction survey, though – it came second in our 2013 results – so owners clearly love both the brand and the cars. But the Roomster was the only Skoda not to make our Top 100 in the same survey, so it’s not pleasing drivers in the way that the Yeti or Superb are – they picked up first and second place. 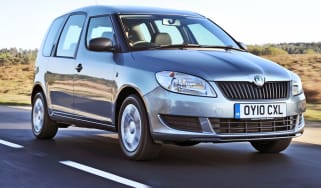 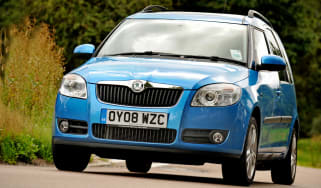 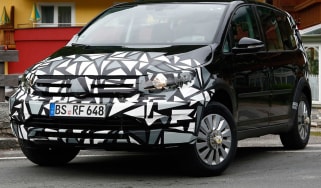 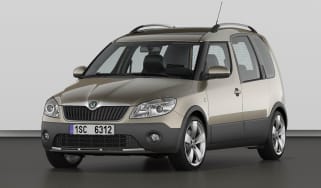 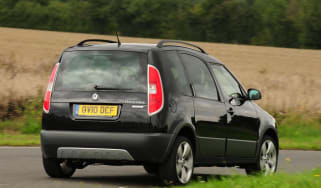 Revised family wagon promises frugal flexibility and a fun drive. But does it deliver?
Skoda Roomster 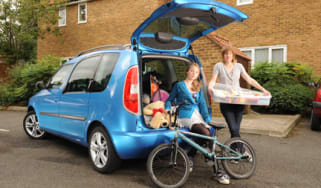 While the jury's still out on its looks, our practical Skoda puts the boot into car boot sale!
VW Caddy Maxi vs Skoda Roomster 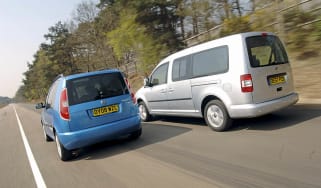 Is Volkswagen’s new van-based Caddy Maxi the most practical no frills people carrier around? We find out as it tackles Skoda’s purpose-built Roomster …
Under Cover

The Skoda Roomster: chic or freak? Some have taken to wearing disguises to avoid being seen in it, but despite the debatable looks, it’s still proving…
Skoda Roomster 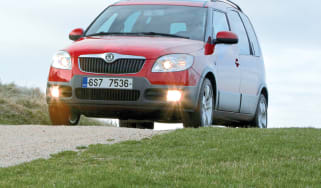 The Skoda's blend of a car-like drive with a spacious, solid and well designed cabin makes it one of the best supermini-MPVs on the market.
Skoda Roomster 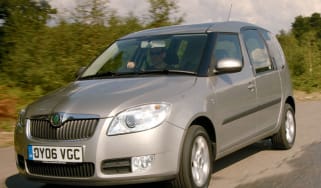 It’s all go at Skoda! Once seen as the VW Group’s sensible arm, the Czech firm is rapidly changing its image
Skoda Roomster 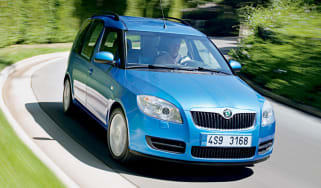 Practical and stylish, the Roomster takes Skoda in a new direction
Skoda Roomster 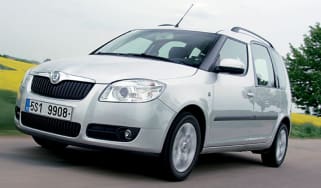 Want a practical, reliable and well built family car? Head for Skoda. Want to stand out from the crowd? Then, until recently, you had to look elsewher…
Skoda Roomster 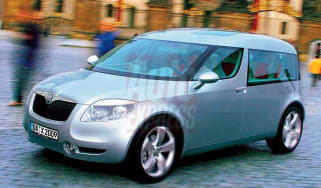 We've seen the future of Skoda - and it's set to offer a new dimension in space travel. The Roomster, which wowed the crowds at the Frankfurt Motor Sh…
Skip to HeaderSkip to Content