The Skoda's blend of a car-like drive with a spacious, solid and well designed cabin makes it one of the best supermini-MPVs on the market. 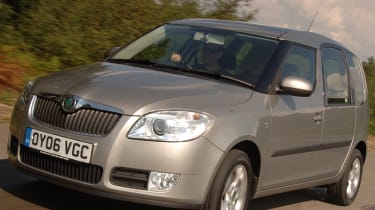 Driving: Despite its supermini-MPV looks, the Skoda is a car-like vehicle to drive. It feels reassuring and the wide track ensures it has predictable steering and excellent stability on the move. It rides better than many rivals, while the steering set-up offers lots of feedback. But performance from the wide range of engines won't set pulses racing. The 1.9-litre TDI is expected to be popular, despite not being the most modern diesel around - and our noise meter reveals its age. However, it proved sprightly at the test track, and flexible in-gear. This makes it an excellent motorway cruiser, even with a full complement of people and luggage aboard.

Marketplace: Bosses are aiming to shake off Skoda's sensible image with the Roomster. Rather than playing safe with its first people carrier, the company has produced a machine that really stands out. At fist glance, it looks like two cars in one - the sharp and pointed front end is quite a contrast to the softer rear. But the strangest design quirk is the difference in styling between front and rear windows; the front echoes a jet cockpit, while the rear is more conventional MPV. Unfortunately, the proportions don't quite work - the end result is that the rear of the car looks taller than it actually is. Combining all the best of an MPV, supermini and estate, according to Skoda, the Roomster comes with a choice of three petrol and three diesel engines - and a simple range of trims: 1, 2 or 3. it competes with the Nissan Note, Renault Modus, Vauxhall Meriva and Fiat Idea, as well as 'van-based' MPVs such as the Fiat Doblo and Citroen Berlingo Multispace.

Owning: The L-shaped rear door allows lots of headroom, while there are plenty of useful storage cubbyholes throughout the cabin. Access to the boot is excellent, and the luggage area is a very useful 450 litres with the seats up. Stowing the chairs frees up a maximum capacity that's more than triple this figure, and doing so is a very simple process thanks to the clever VarioFlex system. This sees the seats fold with one handle and tumble with the other. The two outer rear chairs slide as well, so we think it's unusual that the centre one is fixed. However, the benefit is that with three passengers in the back, shoulder room is plenty. Rear occupants will find the Roomster particularly comfortable. And up front, the driving environment is equally good. You sit low and the steering wheel offers adjustment for both reach and rake. Our biggest gripe concerns rear visibility - the huge D-pillars make reversing a challenge, and it's easy to lose cyclists behind them. The materials used on the dashboard raise the quality benchmark in this sector though, and the fit and finish are good enough to rival premium brands. The only minor criticisms are the flimsy door handles and clumsy heater controls, but overall the interior is streets ahead of the competition. It's priced competitively against those rivals, but standard equipment is mean, while our 1.9-litre TDI test car disappointed with a test fuel economy figure of 39mpg. Residuals are surprisingly disappointing for a new car too, with the diesel retaining 40%; petrols are a bit better, averaging 42.5%.